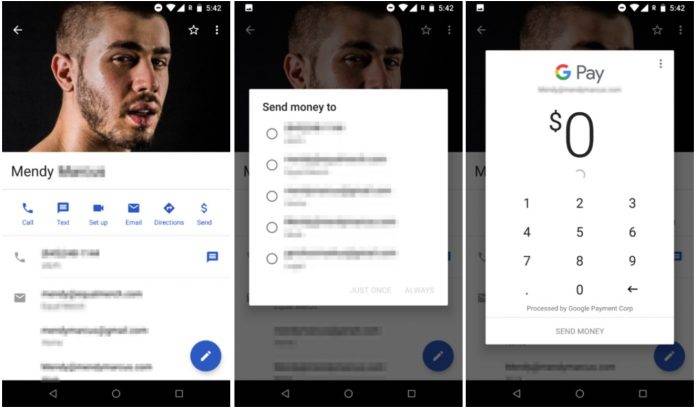 Google probably has to do a whole communication campaign to help us understand the differences between its various mobile payment apps and platforms because it’s getting kind of confusing. But they continue to be testing out some product integration and features. It looks like their newest guinea pig is to add the ability to send money on Google Contacts through the Google Pay Send app. This seems to be the same feature that they introduced to Android Messages which enabled peer to peer payment services on the messaging app.

What is happening here is that the teardown of Google Contacts reveals that it will also get Google Pay Send support, similar to what Android Messages can now do. Some users said that the Send icon appeared in their Contacts page and it looks the same with the UI in Android Messages, except this time, you can choose which contact method you want to use, like SMS or email, etc.

However, there doesn’t seem to be a Request button so you will only be able to send money through this method. But this may also be because it is a server-side change and so Google has not yet finished the full update. Let’s wait and see if we’ll receive a proper update for the stable version of Google Contacts with Google Pay Send.