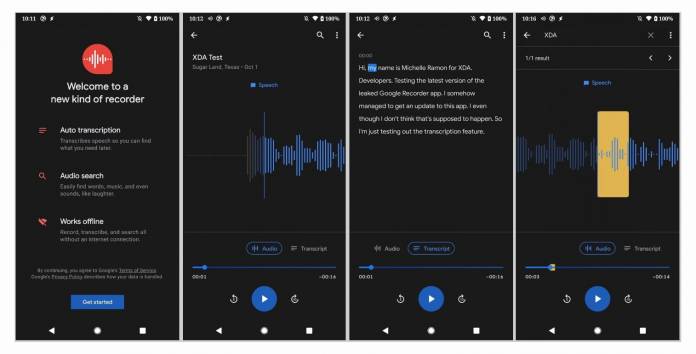 One of the more popular features that the Pixel 4 carried, despite mixed reviews about the device in general, is the Google Recorder app which lets you record stuff and transcribe them in real-time and it stays offline. Eventually, Google added the app to the Pixel 3 and Pixel 2 smartphones. But what about those that have the original Pixel or even other Android smartphones? Hopefully, Google will also make that available officially for them but there’s a sort-of workaround that you can do right now if you know how to install APKs.

The folks over at XDA Developers shared how you can have the Google Recorder installed on your phone even if you see “The app is incompatible with all your devices” notice when you try to download it from the Google Play Store. There are specific requirements that your device needs to have though before you can install the APK. It needs to be running on either Android 9 Pie or Android 10 since the app will not work on earlier versions. Your software also needs to have no significant modifications in its TextView component or else it will not run.

So far, they have made it work on devices from Huawei, LG, Motorola, Nokia, Samsung Galaxy, Sony Xperia, and phones running on a custom ROM based on Android 9 or 10. It also partially works on devices from ASUS, OPPO, RealMe, and OnePlus. The latter devices, unfortunately, won’t see the transcriptions after saving it. And sorry Xiaomi users, the APK doesn’t seem to be working in your devices.

The Recorder has pretty basic functions which is to record, transcribe, and save audio files. But it’s for free and it’s fully offline so there’s an advantage over other recording apps. Plus if you’re big into the whole Google eco-system, then this is another one to add. Note that it only works in English right now and the audio quality of saved recordings isn’t of the highest currently. Google says they’re working on saving it in WAV format later on.

If you want the official, unmodified but older version of the Recorder, then you can download the leaked one uploaded on APKMiror. But the latest, modified, but unofficial version can be found on AndroidFileHost. Meanwhile, if you want the actual app from the Google Play Store, you might have to wait a little while longer or get yourself a newer Pixel device.