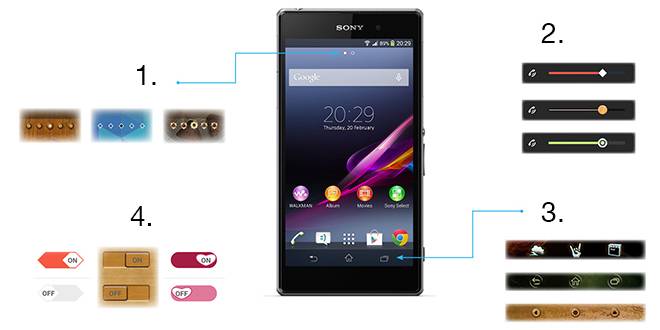 If you’ve always wanted to change how your smartphone looks but dreaded installing homescreen launchers, then Sony‘s new Xperia Themes is for you, provided your device is an Xperia. This built-in feature, coming by way of Android 4.3 updates, lets users customize their devices without losing the functionality provided by Sony’s own custom launcher.

Theming is a big thing in Android, something that users can continue to gloat over that other mobile platform. Of course, one can sometimes go overboard, but at least users have a choice. Sony has made making those choices a lot easier for owners of its Xperia smartphones by providing a way for them to pick and choose themes right off the bat.

Most users will simply select from over 20 themes available for Xperia Themes, but theme makers will be faced by what Sony claims to be several hundred interchangeable graphic elements, attesting to the extreme customization options available. Xperia Themes can not only change the usual wallpapers and icons but even things like buttons, navigation bars, accents, highlights, and more. Fortunately, installing a theme is not as overwhelming, as users can simply go to the Settings menu to select from a wide variety of theme packs available on Sony Select.

Unfortunately, Xperia Themes is completely exclusive to Xperia devices, a fact that may leave owners of other brands green with envy. Of course, one can always install a themeable third-party launcher, but you also have to say goodbye to the feature’s from the manufacturer’s custom launcher that you may have grown to love or depend on.