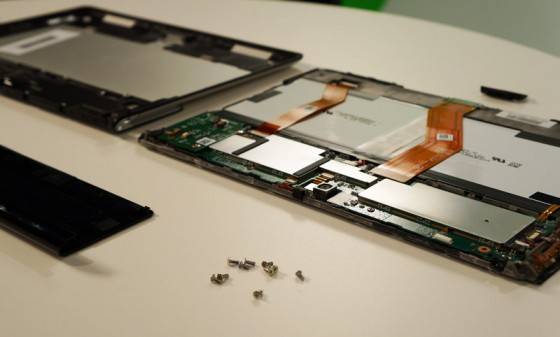 Normally when we talk about teardowns here on Android Community, they’re conducted by a third party organization and are meant to give us not only a better idea of the hardware inside, but also the price of all the parts included in the device. That isn’t the case with this teardown of the Xperia Tablet S, as Sony has decided to conduct the teardown itself. As a result, the company won’t be telling us the combined price of all of the components, but we still get a close look at the tablet’s innards nonetheless.

This teardown also serves as something of a comparison to Sony’s last generation tablet, the Tablet S. The Sony Xperia S – which went on sale today, keep in mind – is quite a bit more compact than its predecessor, but it still comes packing some power under the hood. We’ve got a NVIDIA Tegra 3 mobile processor/1.4 GHz quad-core processor running Ice Cream Sandwich, a TFT Color LCD display capable of 1280×800 resolution, 1 GB of RAM, an 8-megapixel rear-facing camera, and a 1-megapixel front-facing camera. 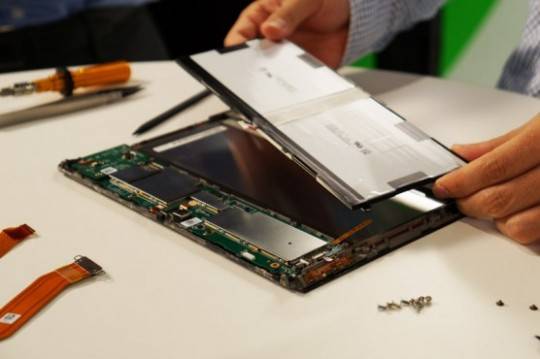 Once Sony engineer Takuya Inaba is inside – which wasn’t the easiest thing to do thanks to the removal of the adhesive tape seals – we’re greeted by the battery, which is pretty large. Despite the fact that it takes up more surface area than the battery in the Tablet S, it’s also quite a bit thinner, lending to the smaller overall size of the Xperia S. The 6000 mAh battery weighs in at 130g, providing around 23% of the total weight of the Xperia Tablet S. 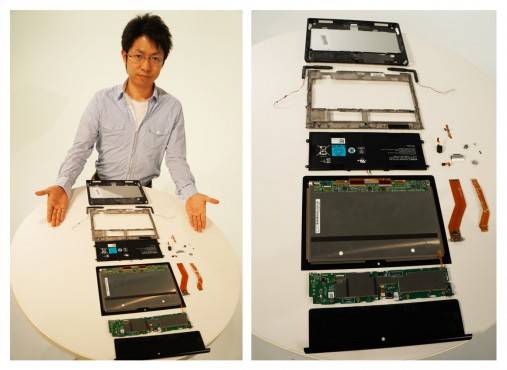 The motherboard sports 4 EMI shields and comes equipped with a carbon fiber material, which dissipates heat and keeps the tablet running cool. On the motherboard itself we have the Bluetooth/Wi-Fi module, DSP, a 16GB eMMC (though you can also bump that up to 32 or 64GB), 1GB of LPDDR2 RAM, the antenna, the audio codec, and of course, the CPU. Removing the LCD screen was something of a pain, as Inaba had to get through all of the sealant that makes the tablet splash-proof, but when he finally did, we were told that the glass is “quite study” and adds a significant amount to the tablet’s weight (Sony didn’t say how much weight, though).

After tearing everything down, Inaba was tasked with putting everything back together. You can see the whole teardown and reconstruction process in the video above, and of course, you can also check out the full teardown over at the Sony Blog, which is quite interesting so long as you don’t mind a little self-promotion to go along with it. All in all, the Sony Xperia Tablet S looks to be a well-constructed machine and at $399, the price isn’t too bad either. Did any of you pick one up today?