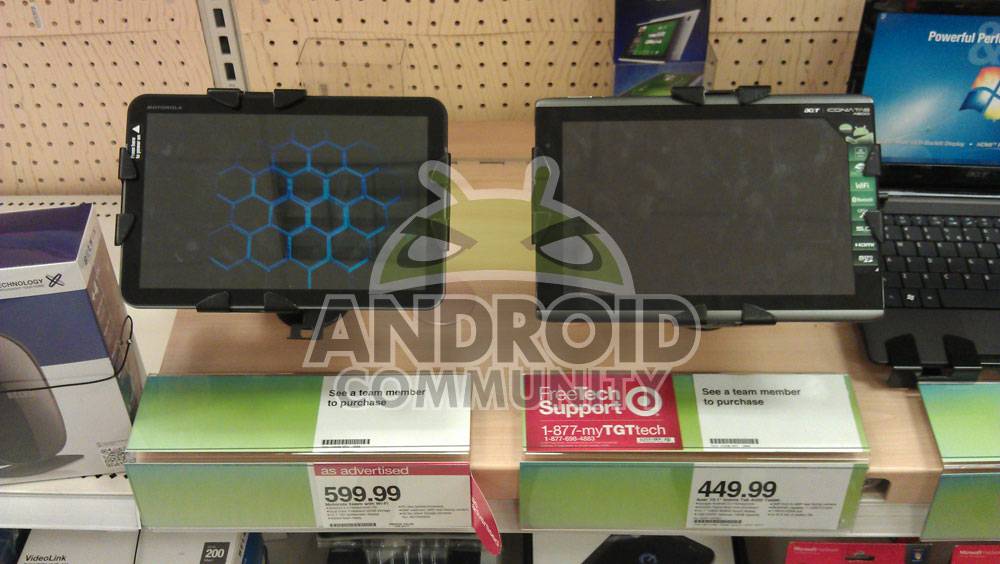 The following is a bit of a reaction piece, and it’s chock full of opinions, all of them my own, so beware of that before you continue on. What we’ve just received from a faithful one of yourselves, the readers, is a set of three images, three photographs collected today from a Target superstore in mid-Minnesota. What you’ll see is a display of two tablets, both of them Android, and both of them models that we’ve reviewed here before on Android Community. Have a look here and see if you can tell why I’m of the opinion that if this is how these manufacturers intend to sell their product, they’ve got no chance.

Perhaps a little more information on what you’re seeing here will help you set a spark: this is the Motorola XOOM on the left and the Acer Iconia Tab A500 on the right. Both of them are relatively new tablets running Android 3.0 Honeycomb, and they’re both relatively awesome to use and behold. How they’re displayed here is inside some rather basic black metal claws, essentially, with only the volume tabs and the power buttons available for you to be pressing.

As you can see on the Iconia tab, you’ve got a sticker strip with an Android character at the top offering advice on the specs of the tablet. This strip is vital since, if our source is correct, the tablet is neither charged, nor is it plugged in. All the information you’ve got on the tablet is what’s written and what you can glean from the physical presence of the hardware. No screen for impressions galore! 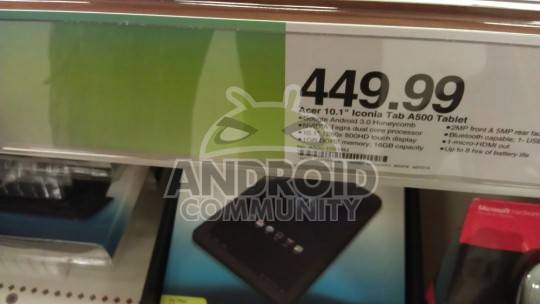 Then the XOOM tablet is in a slightly better situation with a bit of some juice left in her, but because the power button in is such and odd place, (on the back of the tablet), noted by the big white arrow and directions sticker on the left of the display. This tablet does power on, but because it too has not been charging, it warns the user that there’s not much time left for them to be checking out the software before they’re out of luck. 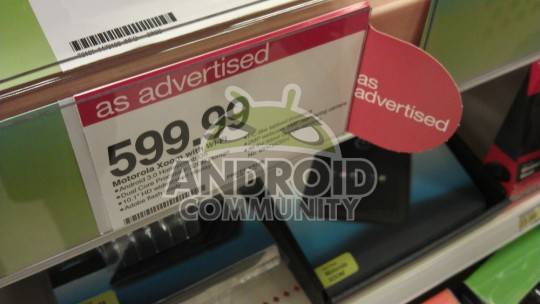 In the next aisle, if I’m not mistaken, since this is what goes on in every Target now, there’s another display with a rather well-situated tablet that’ll knock the socks off of any passerby. This is the iPad 2 display. Everyone understands that they can go to an Apple store to see how the device works or they can simply purchase it here, but none of that matters because it’s under a case. Apple promotes their iPad devices so well that they don’t even need to allow you the ability to touch and feel the software for you to want to purchase the iPad 2 in the store.

Now this is an Android blog, certainly, but one cannot deny the situation here, that being one where Apple is the one with tiger blood. Acer, Motorola, you’ve got to up the ante in Target. You’ve got an alright situation going on with your displays in the carrier stores, sure, but Target is more than just a place where people purchase products. It’s a place where people walk through on the daily, seeing products and learning what they’re all about in a friendly, warm environment. You’ve got to take the time to work out a deal with the store to hold your heads up higher.

Have some pride in Android!

Or at least make sure they’ve got the darned things plugged in.