Xiaomi has decided to one-up fledgling OnePlus by holding its press event half an hour ahead of the other. However, Xiaomi’s surprise lineup, which consists of two routers and a TV box, might not be what many have been excitedly waiting for.

First up is the Mi Router, something that has already been common knowledge among testers. This wireless router supports dual-band WiFi 802.11 ac and comes with its own 1 TB hard drive. The form of the device itself is rather strange, sporting a elongated cylindrical shape that might remind some of one of Apple’s products.

That resemblance to Apple’s devices continues with the smaller Mi Router Mini, which, in all honesty, looks like the Magic Trackpad. Xiaomi isn’t disclosing yet the exact specs of the device but it’s selling feature is supposedly the variety of colors available, including white, black, orange, cyan, lime, and pink.

And last we come to the Mi Box Enhanced Edition, the second iteration of its existing TV box. Compared to the original model, the enhanced version supports 4K Ultra HD videos of up to 3840×2160 resolutions, sports a faster but still unnamed 4 GHz quad-core processor and 2 GB of RAM. It even has a new, slimmer design to boot.

The Xiaomi Mi Router has a price tag of 699 RMB ($112), while the smaller Mi Router Mini only costs 129 RMB ($21). The Mi Box Enhanced Edition will sell for 399 RMB or around $64. Xiaomi also announced that it will be expanding its reach to more countries starting with Malaysia, Philippines, India, Indonesia, Thailand and Vietnam, followed by Russia, Turkey, Brazil and Mexico. 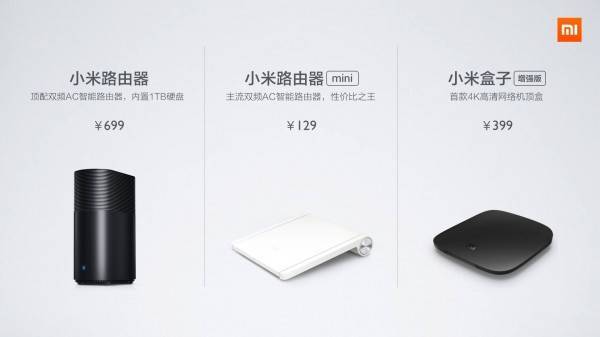 These new devices unveiled by Xiaomi will likely sell like pancakes once they’re out. Unfortunately, for those who have been waiting for or dreaming of a Xiaomi-made tablet coming in the market, this event might have been a disappointment. That said, there’s still a chance that Xiaomi will reveal such a device, perhaps when it won’t be sharing the limelight with other companies.