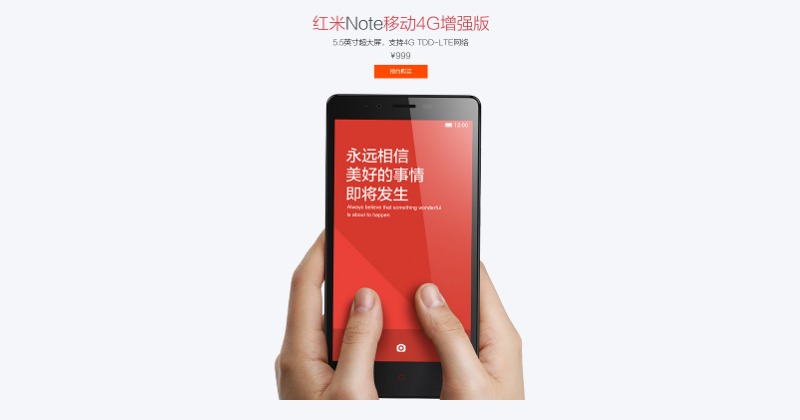 Xiaomi‘s devices may sell like crazy, but not all of its smartphones, like the relatively new Redmi Note, have completely desirable traits. Now the Chinese manufacturer is ready to push that phablet to into the LTE age by announcing its sibling, the Redmi Note 4G, toting LTE connectivity without bumping up the price.

The “Note” part of the name might be a bit misleading, but Xiaomi’s device doesn’t wield a stylus like Samsung’s Galaxy Note or even NVIDIA’s Tegra Note 7. It is, however, Note-like in size, bearing a 5.5-inch 720p HD screen. Practically nothing has changed in this variant of the Redmi Note. You still get the same 1.6 GHz quad-core Snapdragon 400, for one, and the ample 3,100 mAh battery for another. Even the cameras are the same, at 13 megapixels and 5 megapixels for back and front, respectively.

There are, of course, some changes. Unlike the previous Redmi Note, this variant only comes in one configuration, and that’s with the aforementioned processor and 2 GB of RAM. The star of the show, however, is the 4G LTE, compatible with China’s TDD-LTE bands. Xiaomi advertises that this gives users a theoretical download speed of up to 132 Mbps. Of course, that is only during ideal conditions.

The best news of all, at least for those still planning on buying this, is that there is no price change at all, at least compared to the higher-end Redmi Note. This new Redmi Note 4G will only cost 999 RMB, roughly $160 today. That’s the exact same price tag of the non-LTE variant that has the same specs. This is by all means great news for those who still don’t have one, but for those who may have already invested in the original 2 GB Redmi Note variant, this might come as a rather disappointing news.