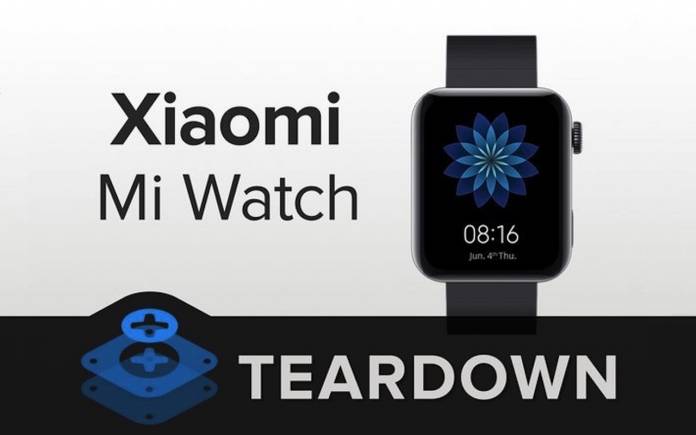 This is the first IFixit teardown we’re featuring this 2020. The last device we featured last year was for the Google Pixel 4. This time though, it won’t be another smartphone but a wearable device. IFixit has pried open the Xiaomi Mi Watch out of curiosity. And just like us, they’re curious as to what’s inside this Apple Watch look-alike. We don’t remember featuring or opening a smartwatch before so this is interesting. It seems easier to open though because of the size but we really want to see what’s inside.

IFixit started by comparing the Xiaomi Mi Watch with the Apple Watch Series 5 first. The Mi Watch is said to be boxier with a digital crown and an edgier case. Its black bezel around the screen is wider and taller. On the rear, you can find the charging contacts plus flappy mounts for the detachable band.

Opening the device is easy. There are only a few external screws to remove and taking them out and the panel will reveal the XMWT01 model number. Apply some heat and use the iFlex to help to open the panel but you have to be careful because you don’t want to destroy what’s underneath.

Immediately, you will see the motherboard, battery, processor, RAM, and some other sensors on the motherboard. At the bottom of the watch barrel, you can see the heart rate sensor and LEDs, four data and charging contacts, two microphones, and an optical encoder for reading the crown’s rotation.

The Xiaomi Mi Watch has received a repairability score of 4 (4 out of 10, 10 highest). Its bands are easily replaceable and removable. The battery can be replaced but you have to go past the motherboard. Most parts are modular except for the circuit board. You can remove the screen to open the smartwatch but it may be challenging and may destroy the display.