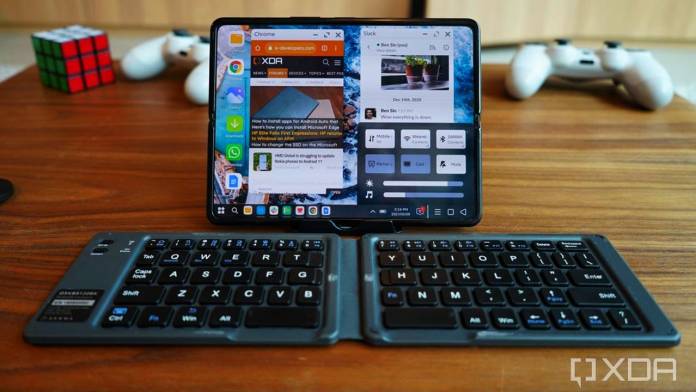 It is fitting for foldable smartphones to function as desktops in foldout mode, it can open new use case scenarios. This however is not a common sight. In spite of the foldable phone pioneer Samsung including DeX support that gives Android somewhat a desktop-like layout with taskbar, start menu and more; its Z Fold phones only activate the feature when connected to an external display and not when the foldable screen is opened out.

Xiaomi now seems to have introduced a feature to its Mi Mix Fold, which can enable PC model in foldout orientation –without having to connect to an external display. Xiaomi Mi Mix Fold, which is currently available in China is expected to hit global markets this month with PC mode support, some additional takers could line up for the device.

Per XDA Developers, the Mi Mix Fold is receiving an update for PC mode that is activated with a simple gesture on the screen. Simply swipe three finger from the right edge to the center of the screen and the PC mode is activated. You know have a Windows-like interface with taskbar at the bottom of the screen displaying the open apps, home button, search icon, notifications, battery, and time and date in Windows style.

Interestingly, this tablet PC mode gives the desktop-like UI it is still Android within and hints of that is visible through say the three navigation buttons on the right corner of the taskbar. While everything looks all refreshing; reportedly, some apps may not be compatible with this mode and may show up in phone mode only.

This PC mode was not a part of the Mi Mix Fold out of the box. It is being introduced to the device through a software update. With Galaxy Z Fold 3 around the corner, who knows, Samsung may take an idea and conceives something on the same line. Let’s wait and watch how the foldable phone market progresses.