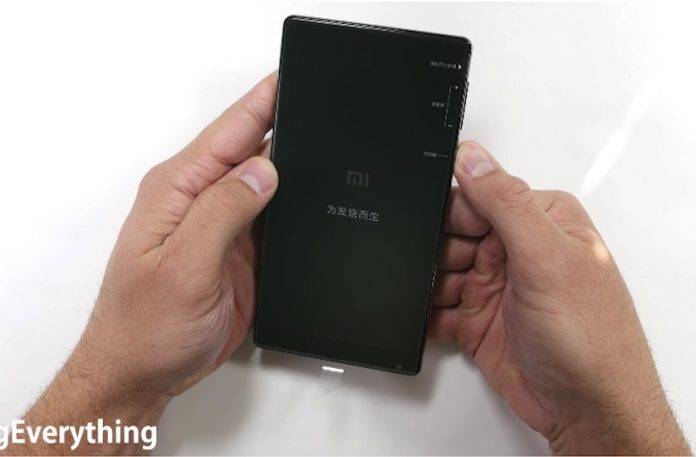 JerryRigEverything knows what he is saying when it comes to doing durability tests of new phones. Zach isn’t a fan of Xiaomi phones when it comes to such tests because past models have failed, prompting him to place them in his Shelf of Shame. The best so far was the Redmi 3 Pro which only barely survived.

First impression when he handled the packaging, it’s all good. It seems the designers really thought about it. The magnetic box set in accordion style is a nice touch, as well as, the leather protective case. Box is a bit heavy but it’s an indicator of great build quality.

Compared to the older Xiaomi phone tests, the Mi Max is way better with the ceramic build. Phone boasts of a glossiness of glass and cold heaviness of metal but it’s for a good reason. Aluminium alloy phones usually scratch at 4 or 5 on the Mohs scale of hardness but this one scratches at level 6—even deeper at 7. This means you can place it side-by-side the iPhone 7 and this year’s flagship phones from Samsung.

The back panel is made of ceramic which didn’t easily scratch. It’s definitely harder than aluminium. A lot of people are saying ceramic could be the material of the future as it is harder but unfortunately, it becomes more brittle. Dropping the phone would be catastrophic according to our tester.

Other findings include a reflective camera, non-plastic glass camera lens, and ceramic side buttons. When heat up, it took ten seconds for the area to turn black. Screen still works and even quickly cools down. Doing the bend test, the Mi Max doesn’t bend in half. There’s some clasps popping but they snap back easily in place.