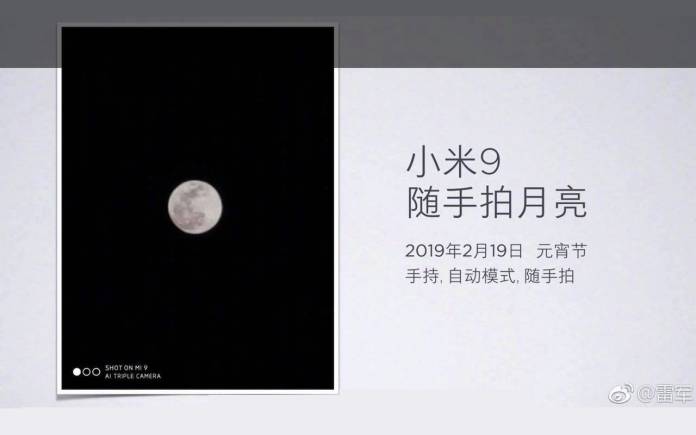 You’re probably waiting for the Samsung Galaxy S10 phones’ announcement later but remember that Samsung isn’t the only big OEM making an important launch this week. At the Mobile World Congress 2019, Xiaomi will be its latest flagship phone–the Xiaomi Mi 9. The Huawei P30 Pro is also anticipated because it will have four rear cameras but it isn’t due until next month. The Mi 9 from Xiaomi will only have three as already revealed. Now these two are being compared especially after seeing full moon shots from both companies.

Two separate teasers have appeared on Weibo, showing off the full moon. Featured above is an image shot on the Mi 9’s AI Triple Camera. Below is a photo taken with Huawei P30 Pro’s Quad Camera.

They look almost the same. Of course, that’s the same full moon. How else can a full moon be different? Then again it really is no surprise because this week, the Supermoon is showing itself. We can’t say much about the quality of the images but we’re curious the two OEMs decided to feature the same thing.

The Xiaomi Mi 9 has an edge because it’s launching this week. Meanwhile, the Huawei P30 and the Huawei P30 Pro will be announced next month. Let’s wait and see.