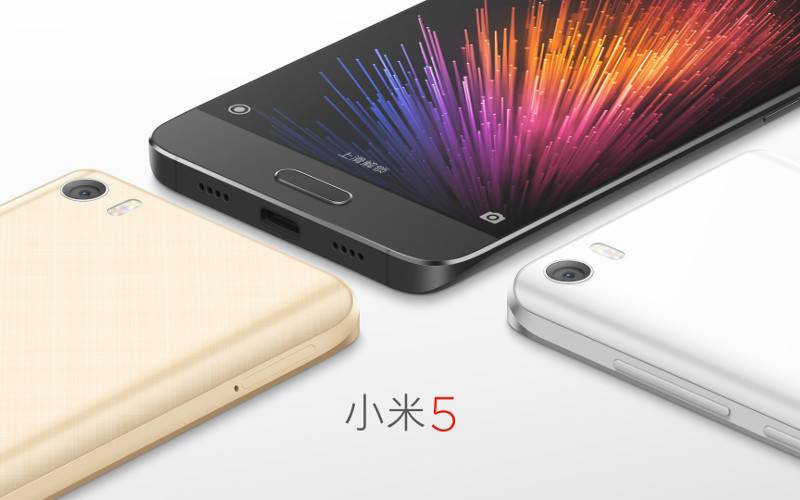 Ahead of its MWC 2016 even, Xiaomi has unveiled the bits and pieces that together make up the Xiaomi Mi 5, a smartphone that, without a doubt, is its early 2016 contender in that rat race that is the smartphone market. Xiaomi’s spec sheet leaves no room for mistakes, this is a high-end smartphone to match this year’s high end smartphones. But while that might indeed wow fans and even onlookers, those advantages might be a bit eclipsed by how the smartphone looks, which is to say, almost like a Frankenstein of design cues.

To be fair, the Xiaomi Mi 5 looks to be a winner when it comes to hardware. A Qualcomm Snapdragon 820 runs the show as expected, making it part of the elite club of powerful smartphones this year. From CPU to GPU to DSP, Qualcomm has been hard at work to tell the world that this is the mobile chip to beat and isn’t a mess like the Snapdragon 810. There’s 4 GB of RAM, not just any RAM but the fastest LPDDR4 RAM. And Xiaomi will be offering 128 GB of internal storage, or at least in one of its configurations. No microSD card slot, it seems.

The rear camera’s 13 megapixel sensor is a Sony IMX298, so you’re pretty much assured of quality. It uses Phase Detection for its autofocus technology. The front camera might sound a bit disappointing based on the 4 megapixel count alone, but that also comes with larger 2 micrmeter pixel sizes, or what some would say “ultrapixels”. 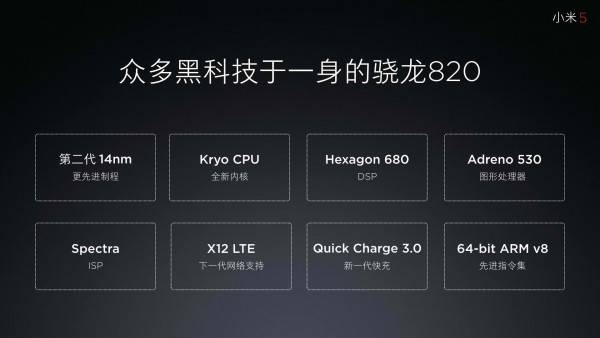 The display might actually be the strangest and most disappointing part of the Xiaomi Mi 5. The company boasts its 5.15-inch diagonal size, which it wants you to believe makes a world of difference compared to the 5.1 inches of the Samsung Galaxy S5 or the even smaller 4.7 inches of the iPhone 6s. That might almost be true except for the fact that it sports only a Full HD resolution. In practice, that means a lower pixel density than either of its two competitors. The screen does throw out bezels, at least on the sides, making it definitely look a bit exquisite and sophisticated.

In talking about the display, Xiaomi interestingly put it side by side with those same rivals. Expecting that there’s no getting around comparisons, it goes on the defensive to show how different it is, but in the process, almost shows how similar it is as well. The display comparison, for example, hints at how the front design looks like a mix of Samsung’s layout but with the iPhone’s more rectangular form. The back of the Mi 5 is curved at the sides like the Note 5 but, and Xiaomi insists, is actually more curved than Samsung’s rear. To be fair, it’s not exactly easy to be completely original these days, especially when everyone jealously guards their designs, unique or not.

Back to the features, Xiaomi fans will probably not be disappointed with the Mi 5, perhaps except for the screen. There’s a fingerprint scanner, of course, right underneath the home button, a curious deviation from the conventional back side location among Chinese OEMs. There’s NFC and Qualcomm Quick Charge 3.0 for the large 3,000 mAh battery. They won’t be disappointed with the build as well, if they don’t mind the design. Xiaomi is quite proud of having achieved a 129 gram weight, while still using premium materials like a 3D glass body. The Galaxy S7 and the iPhone 6s admittedly weigh a lot more than that.

Xiaomi is sometimes compared to Apple in the way its fans gobble up its smartphones, no matter what the rest of the world thinks about them. It’s not yet certain how those same fans will take the Xiaomi Mi 5, given its mix of delectable specs, a mediocre display, and mishmash design. Xiaomi is offering several configurations for the Mi 5, with matching prices, of course. At the lowest, you get one with a Snapdragon 820 cloced at 1.8 GHz, with 3 GB of RAM and 32 GB of storage for 1,999 RMB, roughly $300. Up a bit has a Snapdragon 820 running at the regular 2.15 GHz, matched with 3 GB of RAM and 64 GB of storage for 2,299 RMB, more or less $350. And at the very top is the same CPU with the highest 4 GB of RAM and 128 GB of storage, all for 2,699 or $413. That price is definitely considerably lower than what this year’s flagships even start with. Suffice it to say, Xiaomi knows how to butter up its fans.

Xiaomi will be on stage at MWC 2016 in a few minutes, so watch this space for more updates.