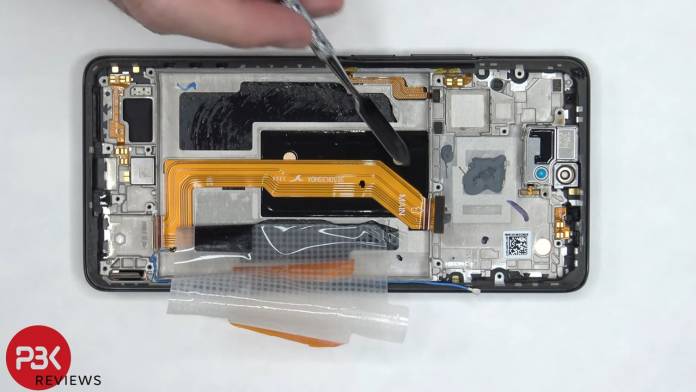 The Xiaomi 11T Pro hits all the right notes in terms of stellar hardware and peak performance. The smartphone speaks for itself with the highlighting 120W HyperCharge fast charging and the active cooling system. If your curiosity doesn’t end there, an extensive teardown by PBKreviews will suffice your urge to know the phone better on the inside. The disassembly gives a closer look at the hardware inside and the ease of repairing the phone if things go south.

The teardown gets going with the removal of the back glass plate that reveals an array of screws hiding the mainboard and the cameras. Plastic covering over the cameras has an NFC module, large graphite strip and antenna lines.

Under the motherboard is the intricate cooling system we mentioned before – covered in graphene film, thermal paste and copper tape. All this is to keep the temperature down as the Snapdragon 888 SoC kicks into action for high-octane gaming or other graphics-intensive tasks.

The 11T Pro gets a dual battery structure – each of the modules having separate connection cables. Keeping in mind the 120W fast charging ability, the bottom of the battery housing also has a graphite film and copper vapor chamber to dissipate heat as the fast charging kicks in.

The teardown specialist gives the Xiaomi 11T Pro a reparability score of 8/10. This is pretty impressive given that some of the other flagship phones score way lower.

The phone has a 5,000mAh battery to go with the option of choosing the top-of-the-line variant of 12GB LPDDR5 RAM and 256GB UFS 3.1 storage. Cameras on this one are impressive with a 108MP primary sensor leading the charge and an 8 MP ultra-wide shooter and 5 MP telemacro cameras completing the setup.