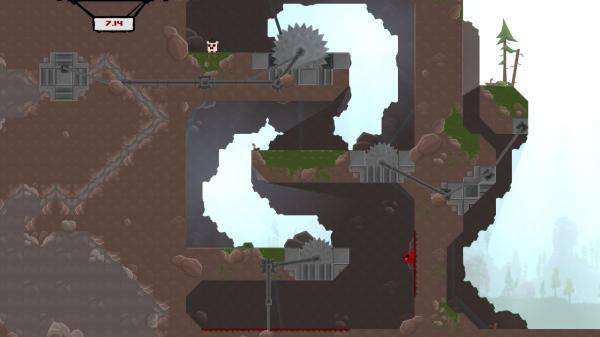 Imagine, if you will, a classic two-dimensional platformer of the Mega Man or Ghosts and Goblins ilk. Plenty of twitch jumping and running, and taking out humorously proportioned sprite bad guys with improbable methods of self defense. Got it? OK, now imagine that your hero character is half a pound of ground beef. That’s the gist of Super Meat Boy, a flash game that gained acclaim when it was published to the Xbox Live Arcade and later desktop computers. According to remarks made by developer Team Meat (I’m sensing a theme here) their next game will probably come out on mobile devices.

Of course that’s no guarantee of an Android version, at least for most games. But lead developer Tommy Refenes has made his preferences well known over the last year or so, loudly proclaiming his distaste for the iPhone, the iTunes App Store and Apple in general. In short, he’s our kind of dev. “If it comes out, it’ll come out for everything at the same time. I like Android more than I like iOS.” Thanks, Tommy – so do we. Since the company’s CEO has indicated that the next project would be coming to the iPhone, that’s a pretty good indication that it’s headed to Android, too.

Super Meat Boy started out as an in-browser Flash game, attracting digital masochists with its punishing difficulty. The gist is that Meat Boy must rescue his girlfriend Bandage Girl from the evil Dr. Fetus. Yes, really. Players must navigate a nightmarish 2D landscape of buzz saws, spikes and other massive tools of dismemberment. If you die, you meaty former self remains stuck to the landscape in various states of dismemberment. Upon its release on XBLA, it received nearly universal acclaim from reviewers. It’s possible that Team Meat’s next game will be something outside of the Super Meat Boy universe… but come on, they call themselves Team Meat. You can play the original here.