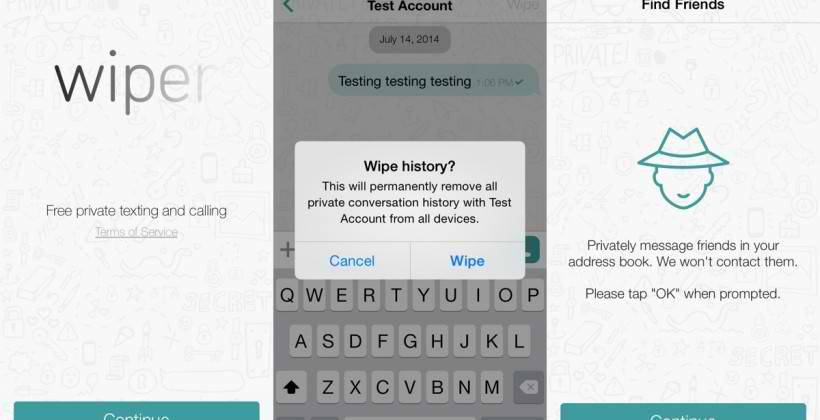 Private messaging apps are a dime a dozen now, with Viber, WhatsApp, Kakao Talk, WeChat, etc. But even though they are supposedly not for everyone’s eyes, hence the term “private messaging”, nothing really remains private within those digital walls, as they are still stored in their servers and your friends’ apps as well. A new app called Wiper promises to be be the most secure of all these messaging apps, as it gives you utmost privacy and full control of your conversations.

As the name suggests, the app lets you have the option of removing your chats from both the app, your friend’s app and their servers as well, if you choose the “Wipe” option that is found within the conversation. You also have the option of erasing the call logs of the app, which offers you free voice calling as well, aside from the truly private messaging. So the wipe option basically removes all traces of your activities within the app, in case you were planning on using it for clandestine conversations (hey, it doesn’t judge) or if you want to use it as your official messaging app for your burgeoning spy career.

But aside from the wipe option, it also has the usual messaging features. You can share normal texts, emoticons, stickers pictures and even videos as well. The sound quality of the voice calls are guaranteed to be HD, but probably it also depends if your Internet connection is good. But even if you do not choose the “off the record” or the wipe option, your calls and messages are encrypted securely end-to-end. It also lets you know if the recipient of your message has already read it. Another important feature of this app is that it lets you know if the recipient has taken a screenshot of your messages.

Wiper is available for free at the Google Play Store. It also has several language options, including Chinese, French, German, Italian, Japanese, Korean, Portuguese, Spanish and others.