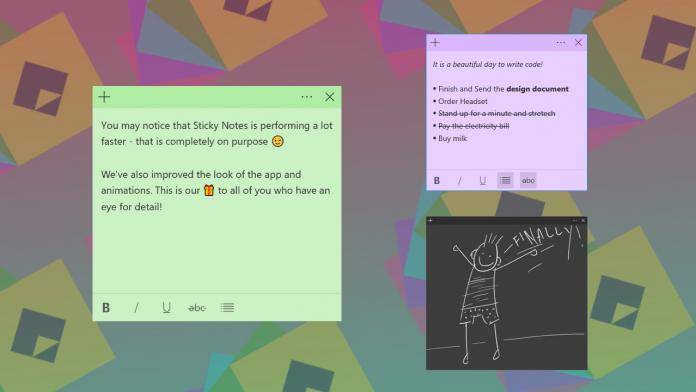 If you’ve been a long-time Windows user, probably one of the things that you overlook in terms of productivity processes is the Sticky Notes feature. It’s a convenient way of taking down quick notes when you don’t have time to open your official note-taking app, but either because it’s not feature-packed or you’re not used to it, a lot of people don’t use it. Microsoft wants to change all that with a revamped version and they may even be bringing it to your Android smartphone.

The new Sticky Notes, which may be version 3.0, will soon start testing for the Windows Insiders beta users. In fact, one of the people working on this redesign has been talking about some of the new features that people can expect from the app. This includes the still-popular dark theme to make it easier on the eye strain and “less scandalous” in dark areas. You will also get a new formatting bar which should make it easier to format your notes, hopefully like what Google Keep offers.

There will also be new animations within the app, if you’re into that sort of thing that makes productivity apps more interesting to use. And you’ll get the usual vague promises of improved performance and accessibility, which hopefully means the Sticky Notes will be faster and easier to find and use on your desktop. Even if they’re calling it a revamp, there’s really nothing majorly different about it but hopefully it will be better.

But even better news is that they might be bringing Sticky Notes to your Android device. This doesn’t just mean that you’ll have an alternative option to use as a reminders app on your phone. More importantly, this means the notes you save on your desktop can also be accessed on your mobile device when you’re on the go. This makes sense given that Microsoft’s goal is to bring more cross-platform products for their users.

We don’t know yet when these changes will be rolling out, both for desktop and mobile. But if you’re using a Windows-based computer and you haven’t yet, try checking out the Sticky Notes and then see later if it will really improve with version 3.0.