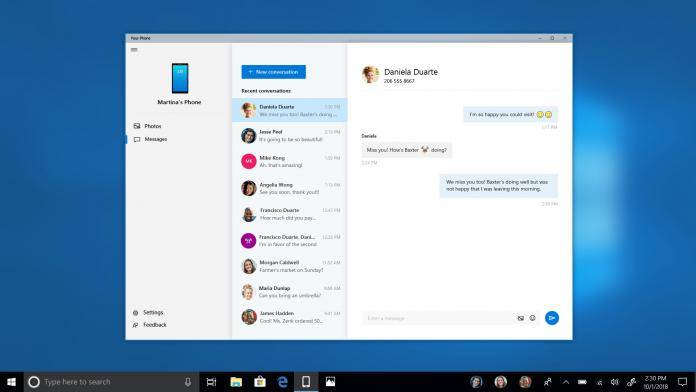 For people who work on both their mobile device and their computer/laptop, having an app that can let you work seamlessly across the two is something that would definitely appeal to them. Microsoft is making this almost a reality by finally making live their promised Your Phone app. You will now be able to see and respond to your SMS on your PC as well as view photos you took from your phone. But it’s still in the early build stage and is available for those on the Windows 10 Insider Preview program.

The Windows 10 Insider Preview Build 17755 has now made live the functionality promised earlier this year. It’s still not perfect by any means since it’s still not a final build but at least you’ll now be able to view, send and receive SMS from your smartphone to your PC. You can use your keyboard to type out the SMS as well as your digital pen if you’re using a pen-capable device. It will convert it to text of course before sending. You can also use voice to dictate a message by pressing the Windows logo key + H and starting your dictation.

When you take photos on your mobile device, transferring them to your PC can sometimes take a few steps. But with the Your Phone app, these photos will automatically show up on your PC. Well, at least the most recent ones. No details yet were given as to how extensive the photo syncing and accessing will be, but at least now you can see that aspect of it working.

The new preview build also has a few changes and improvements like the build watermark not being seen anymore. But they want to make it clear that this is not the final build yet. They were also able to fix some issues like the slower resume from hibernation and HDR video being clipped.

They did not give a timeframe yet as to when the final build will be available but if you’re on the Windows Insider program, you should be able to play around with it now and give your feedback.