Long-time Android fans and HTC aficionados have probably noticed that in HTC’s advertisements and press shots, their distinctive clock widget always shows 10:08. Why is this? Is it because of some connection with a founder’s birthday? The moon landing? A Masonic ritual? Well, no: the real reason is much more ordinary, if somewhat obscure. HTC’s official blog clues us in on why.

See, 10:08 is the time at which the maximum number of cells on a digital 12-hour clock (like the one you’ve probably got sitting next to your bed) are lit up. Of course “88:88” would be ideal, but since the clock is constrained to real time and most of them only have two cells for the first hour position, 10:08 is as full as the cells get. Of course, modern touchscreens aren’t limited to this, so why keep the trend going? HTC doesn’t say this in their post, but it probably goes back to the original HTC Touch running Windows Mobile 6, way back in 2007. The TouchFLO interface introduced in this model eventually became the Sense UI we know today. You can see the digital-style clock in the Wikipedia photo below: 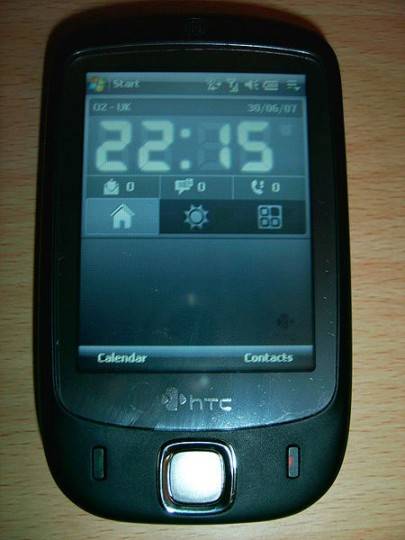 Wikipedia also tells us that 10:08 (or something close to it) has been a popular position for analog clocks and watches in marketing materials for decades. Reasoning varies, but the most obvious seems to be that the symmetrical hands wouldn’t obscure the manufacturer logo (either below the 12 or above the 6) or the date or week view, if such is present. There you have it folks – conspiracy theorists, it’s time to move on.