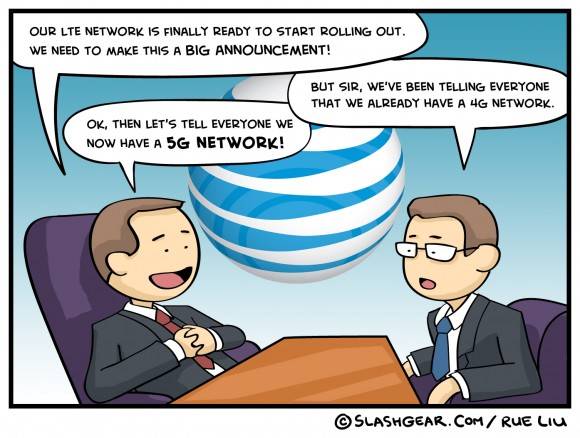 Lets begin by noting that marketing, especially when it comes to technology, is all about making the consumer believe two things. The first thing a technology consumer should believe is that they need the technological breakthrough you happen to be selling. The second thing a technology consumer should believe is that your device or service is only good until you’ve got a newer product or service for sale. But what if you’ve got a product that isn’t quite as good as your competitor? In the epic case of USA’s infatuation with mobile network speeds, carriers have chosen the wrong path: aping one another.

In the current state of things in the mobile industry, at least here in the USA, is one where the actual performance of your network has nothing to do with the label you’re legally allowed to give it. All of the major mobile carriers in this country are saying they’ve got a 4G network while each of them is very, very different from the next. Instead of offering a superior product, businesses here are leaning heavily on advertising and marketing, (read: evil,) to sell consumers on the idea that they’ve got the most bang for the buck they’re about to spend on mobile data.

I’m not going to cry and beg here, I’m not going to tell you that I demand anything from these mobile carriers, no way. Instead what I’m going to do is offer some sage advice. If you’d like to win the pocketbooks of your consumers for longer than the amount of time you’ve got the hottest device on the market, you’re going to have to stop announcing that your network has 4G speeds.

And you can’t just stop there. You’ve got to sell the public on the idea that a single term for a product such as network speed is bunk. Why? Because it is! And not only is the term 4G an absurd goal for every single big network to be reaching for, it’s a pile of spit. Wireless networks have put so many different speeds under this same umbrella term that it’s lost all meaning, and has become a situation that people will look back on and say, “shoot, that was silly, I should have just gone with network X all along, at least they weren’t lying to us”

Network X, here’s what you do to differentiate yourself and not only gain the majority share of the mobile business, but the majority mind share of the consumer public as well. Completely forget everyone else and come up with your own terms. Obviously keep an eye on everyone else behind the scenes, but stop acting like a bunch of politicians and act like the omnipotent businesses you are. Why do you think Android is so powerful? Why do you think Apple is so powerful? They speak in terms their audience understands and they allow the consumer to choose based on who they love the best, a situation I don’t think any of the major networks are doing enough to nurture at this very moment.

Be a home to your consumers, don’t be a race car driver in an Indy 500 against the rest of the networks. Furthermore, Ozzy and Bieber are making fun of you, and have been since the Superbowl.