One great thing about the state of mobile phones these days is that every carrier has a great selection of smartphones that users can choose from. And that means they can pay attention to more important things like coverage and speed. So who has the fastest network, especially 4G networks, is a burning question. It’s also a difficult one to nail down as it depends on carrier, phone and even how loaded the network is.

PC World/Novarium commissioned a study where they tested 4G etworks in 13 cities all over the country. Their results show overall, that wireless data speeds have increased 3 fold since last year, which is great news for mobile customers. Verizon Wireless was on top this year with their 4G/LTE network being available in 12 of the 13 cities tested. And while PC World found that Verizon’s 4G/LTE network was fastest with an average download speed of 6.44 mbps, and upload of 5.0 mbps, they also found that there were few customers on the network and few phones to chose from at the time of the test. It could be that as Verizon rolls out more phones and gets more customers from both phone and tablet data plans, that they’re network dominance may dip. PCWorld also found that while Verizon’s speed is tops for 4G, it’s 3G network has dropped in performance or stayed the same in 10 of the 13 markets. 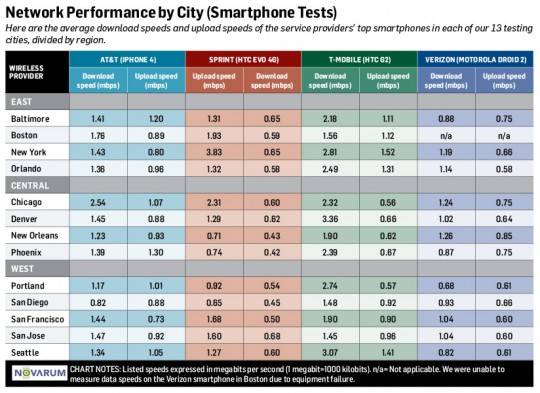 Phone wise, T-Mobile came in on top with the HTC G2 being the fastest with an average download speed of 2.3 mbps, a 52 percent lead over Sprint’s EVO 4G. But PCWorld also went to say that the big winner in the annual speed survey was AT&T. Even though Ma Bell didn’t win Gold as the fastest network (although they brag they are), it has increased it’s network speeds by 76%, fending off similar speed bumps by the other carriers. But what PCWorld gives, they take away, as the speed gains the network enjoyed didn’t translate well to it’s flagship handset, the iPhone 4. And that means while Apple may have launched the smartphone craze, the Android platform is screaming past it like it’s standing still.