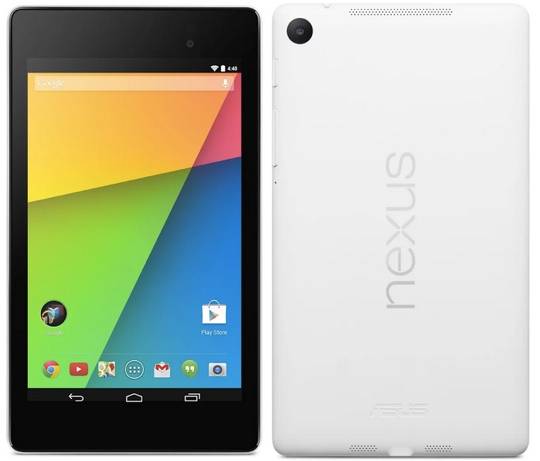 Google quietly added a new addition to the Nexus 7 tablet lineup today. The new arrival is a new color — white. While the specs and pricing remain the same as before, the white model Nexus 7 does have a few tidbits worth mentioning. To begin with, this model is only available with 32GB of storage space.

Unlike the black Nexus 7 with 32GB, the white model is only available with WiFi. Google hasn’t said anything in regards to a cellular connected model, or a 16GB variant coming available in white. That said, the white 32GB Nexus 7 is priced at $269 and currently showing as being ready to ship in 1 to 2 business days. Coincidentally, that is the same estimate the black model has at the moment.

As you can see in the image sitting above, this new Nexus 7 is white on the back and sides. The front, specifically, the bezel around the display is still black. Otherwise, the tablet has a 7-inch display with a resolution of 1920 x 1200 and a ppi of 323. The tablet is powered by a quad-core 1.5GHz Snapdragon S4 Pro processor with 2GB of RAM and also has Adreno 320 graphics, a 1.2 megapixel front-facing camera and 5 megapixel rear-facing camera. There is also a 3950 mAh battery and the tablet supports the Qi standard for wireless charging.

Aside from the new Nexus 7, Google seems to have added a few other new additions to the Play Store today. We have yet to see a new model Nexus 10, however there was a Google Play edition LG G Pad 8.3 tablet and a Sony Z Ultra smartphone. Those are priced at $350 and $650 respectively and similar to the white Nexus 7 — available to ship in 1 to 2 business days.