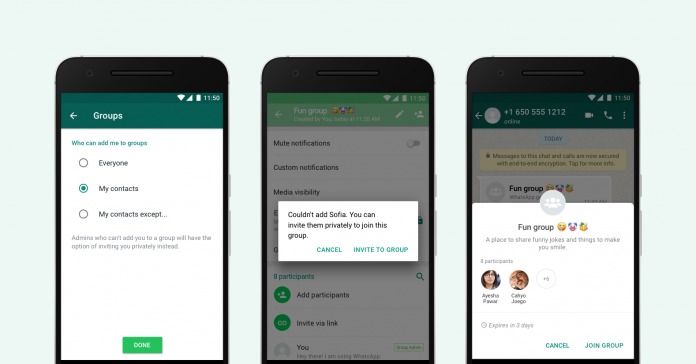 If you’ve ever found yourself constantly getting added to WhatsApp groups without friends or random people getting permission for you to be added, we have sort of good news. A new tweak to the Facebook-owned messaging app service will supposedly give you new settings and invite system abilities that should let you avoid getting too spammed on the app. This is still part of the network’s continued efforts to salvage its reputation when it comes to privacy issues in the eyes of the public.

The update to the privacy settings will “further empower users to have more control over group messages they receive.” You will now be able to set it up as to who can add you or not add you to groups without your necessary approval. A lot of users suddenly find themselves part of groups that they find useless or even annoying so this is one way for you to be able to control this aspect of your WhatsApp life.

There are now three options in your “new privacy setting and invite system” – Everyone, My Contacts, and My Contacts Expect. The first two are pretty explanatory while the third one will let you add a few exceptions to the rule, like those contacts you know specifically are prone to adding you to random, useless groups. There was actually an earlier version of that called “Nobody” but this one is more versatile of sorts.

However, in order for you to enjoy these new settings, you will have to opt-in as it doesn’t seem to be automatically available. Go to your WhatsApp Settings then find your Account section and then go to the Privacy part. Tap the Groups section and then choose from among the three options you have. And if you choose wisely, then you’ll probably have an almost spam-free WhatsApp life.

This change to the privacy settings is another step in WhatsApp’s expansion in a more app-based social network. Some say it’s actually becoming similar to its parent company Facebook but now, you can have it without annoying spam messages and groups.