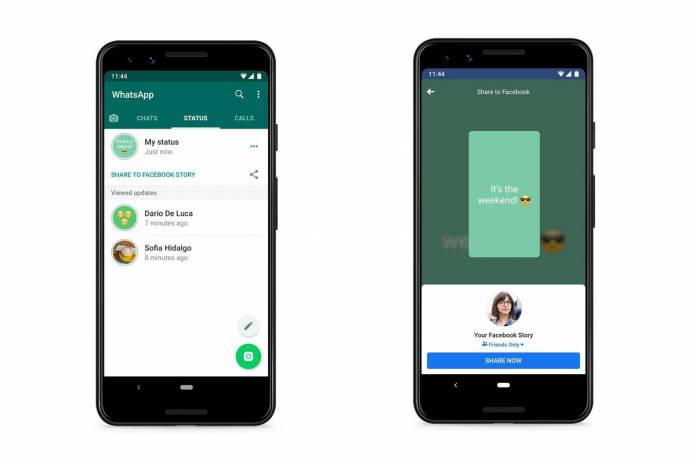 If you’re a fan of posting your Stories-likes status on WhatsApp but wished there was an easier way to cross-post it on other apps, the Facebook-owned company is testing out something that would sort of let you do that. Beta users of the messaging app will now be able to share their status on other apps like the main Facebook one, sister app Instagram, as well as other apps like Gmail, Google Photos, etc. How they do this though has to be very careful lest they once again be fined by regulatory bodies.

If you’ve never posted a WhatsApp Status in your life, it’s pretty similar to Instagram Stories or Facebook’s My Day where you can post images, text, and videos and then it will disappear after 24 hours. If you want to also share that brilliant status to other apps, including the other apps owned by Facebook, you’ll now see the sharing option under the status.

But don’t worry, Facebook still isn’t linking your WhatsApp account to the main one and to Instagram. What will happen is that the data-sharing APIs that Android uses for other apps will be utilized and so your data is transferred just on-device, between the two apps you chose. You also won’t have an option to automatically share all your WhatsApp Status to your Facebook. Sharing the status will still mean they’re two separate events within their system.

Facebook previously said that user data will not be shared between them and WhatsApp which they acquired back in 2014. However, two years later, they changed their tune and said that WhatsApp user data will be shared with Facebook. Eventually there were fined by the European Commission to the tune of $122 million for misleading regulators.

While it’s convenient for WhatsApp users who want to share on Facebook, it’s still a cause for concern for those with privacy issues with the social network giant. Their planned move to let users message each other across Facebook, Instagram, and WhatsApp “across a single technical backend” according to The Verge, is being met with a lot of concern given Facebook’s recent history in the area of privacy and security.