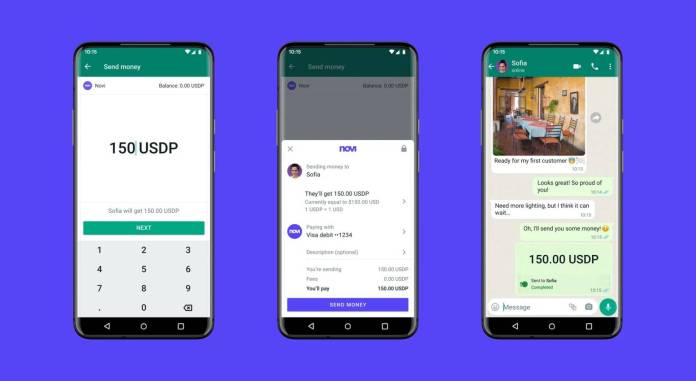 Meta recently launched a pilot test program of its digital wallet Novi which uses Pax Dollars, a stablecoin pegged to the U.S dollars. Now they’re bringing this cryptocurrency-based payment option to WhatsApp although it’s only available for a limited number of users in the U.S. Those that are part of this test will be able to send and receive money on the messaging service through the Novi digital wallet. This should make it easier for users to exchange money on the platform, especially this holiday season.

Novi’s website explains how WhatsApp users will be able to use the payment program. It works just like sending other attachments on the service. Tap on the paper clip icon on the app and if you’re part of the test program, you’ll now see a new Payment option from the menu. You will most likely have to set up an account with Novi and link some sort of payment source but they say there are no fees (yet) for sending or receiving money. There are also no limits on how often you can send payments.

The payments are transferred instantly so there’s no need for a waiting period unlike with some banks. The payment integration should also not affect the end-to-end encryption on the messaging app since this is turned on by default for all one-on-one conversations. This is part of Meta’s plans to integrate payments and cryptocurrency as well, although plans have considerably shifted since they first announced this back in 2019.

The pilot program was announced by Novi’s incoming head Stephane Kasriel as well as WhatsApp’s Will Cathcart. It’s a good time to test this out now as there will be a lot of money exchanging between friends and family members during this holiday season. Having the ability to do so through WhatsApp, if that’s the messaging app that they use mostly, will be convenient. Kasriel says that Novi will be able to help do that “securely, instantly, and with no fees”.

There's a new way to try the @Novi digital wallet. Starting today, a limited number of people in the US will be able to send and receive money using Novi on @WhatsApp, making sending money to family and friends as easy as sending a message. 💸💬 pic.twitter.com/dGz3lejri7

While the Novi pilot is also available in Guatemala, users there will not be able to use it on WhatsApp. They’ll have to make do with the standalone Novi app. For selected users in the U.S, the WhatsApp Novi test will be available in both English and Spanish.