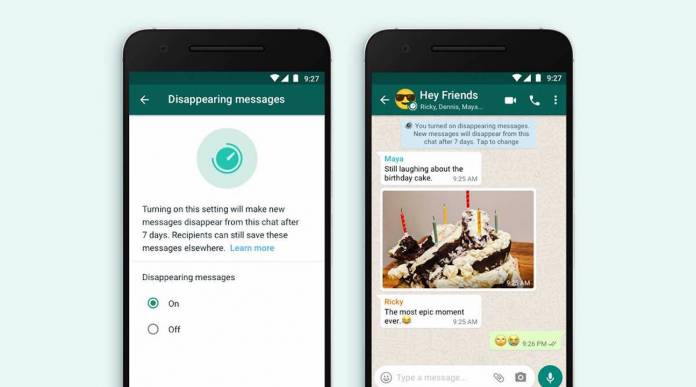 WhatsApp seems to be experimenting with several ways for your messages to automatically disappear after a certain amount of time. Late last year, they rolled out the disappearing messages feature but some thought that seven days was a bit too long. Now sources are saying that they are looking into giving you the option to make the messages disappear automatically after 24 hours. This comes just a few days after the same source says that they are also testing out self-destructing images when you leave a chat group.

WABetaInfo tweeted out that the Facebook-owned messaging app is testing out the ability to make messages you sent on chats disappear after just 24 hours. The current disappearing messages feature will let you set it for seven days, which might be an eternity for some. There are no details yet on how this will work though but if it’s anything like the current feature, then it should work for both individual and group chats.

WhatsApp is testing the ability to set messages to disappear after 24 hours.

A few days ago, WABetaInfo also tweeted another feature that WhatsApp is reportedly working on as well. When you enable the feature and you leave a chat, the images that you sent in that chat will self-destruct. These photos cannot be exported from the app. But there is no screenshot detection as well so the other people in the conversation may take screenshots of that image, which may defeat the purpose.

The self-destructing image is something that other apps like Snapchat and Instagram Direct also have so it’s not something really new. But both the disappearing message and self-destructing image can be useful for some who may not want “evidence” of a particular image that they sent a one-on-one or group chat. But if someone else screenshots it, then there may still be evidence floating around someone else’s device.

There’s no news yet as to when we’ll eventually see these features. In the meantime, if you want to keep using WhatsApp after May 15, you may want to review and accept its new privacy policy.