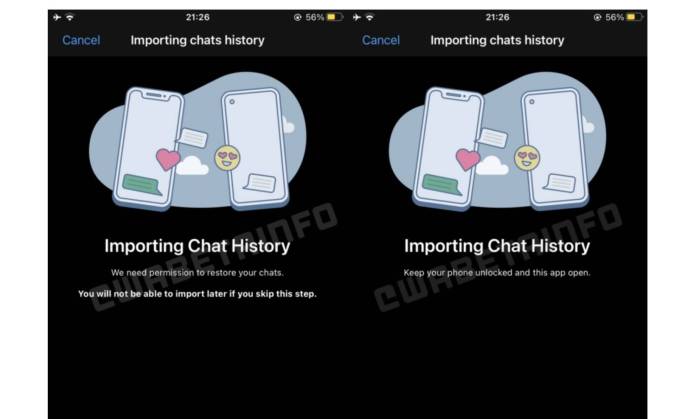 You would think that it would be easy to migrate your messaging account including your chat history if you were changing phones. Some messaging apps use the cloud to do it. But WhatsApp users can tell you that it’s not that easy if you’re switching from an Android device to an iPhone. The Meta-owned app has been working on making chat migration easier for the OS-switchers and now they’re close to rolling out the feature although there’s still that extra step of using another app.

WABetaInfo says that version 22.2.74 for iOS devices will finally include the ability to migrate chats from Android to an iPhone. Currently, iOS devices can migrate to Samsung phones and Pixel devices. But those that are using Android and have new iPhone devices will have to wait until this feature rolls out to the stable version. But this will only apply to Android 12 devices and they will have to download the Move to iOS app to finish the process.

Based on the screenshots shared, users will have to do the chat migration the first time they open the WhatsApp app on their new iOS device. It seems that you cannot do this later on if you decide to skip the step. The changelog also shows that you would need an extra app, specifically Move to iOS, to be able to migrate the chat history. Other messaging apps simply use cloud services like Google Drive to back up the chat history and then re-download them on a new device.

Something else that WhatsApp users have been waiting for is multi-device support which they have been promising for some time now. But it seems the full functionality of this is still in the works even though competitors like Telegram have had these for some years now. Right now you’ll be able to enjoy this as a public beta feature for Desktop, Web, and Portal. They’re planning to eventually release it but currently, that’s where we’re at.

As for the chat migration feature, it’s still currently not available and we don’t know what operating systems will be supported. Hopefully this will roll out soon even if it’s just for beta users since this is a long time coming.