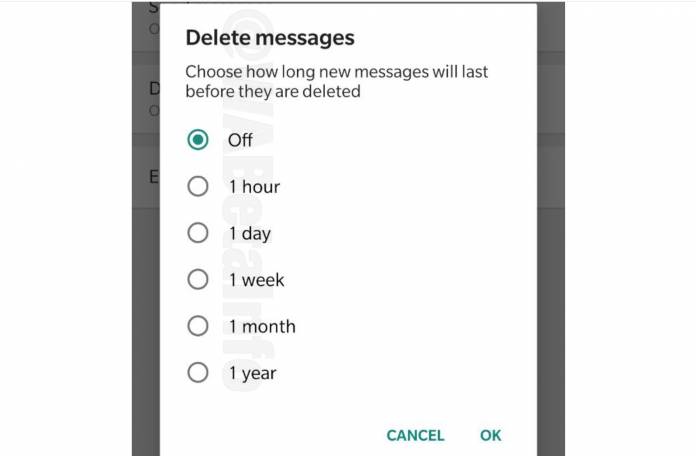 A couple of months ago, we told you that WhatsApp was testing out disappearing messages just like what other messaging apps like Telegram and Viber already have. It looks like they’re now rolling this out in the latest beta version of the app but it’s now called Delete Messages. But it’s not yet available for everyone in both the beta and the stable version as it may still be under development. It seems to also be available in the Contact Info or Group Settings, but for the latter, only administrators can enable it.

The WABetaInfo site shared screenshots of the Delete Messages option that is now rolling out to some of the beta users. There’s no explanation as to why it was renamed from the previous Disappearing Messages but it’s probably more straightforward now and you don’t have to wonder what it actually does. If you’re one of the users “gifted” with this test, then you’ll be able to toggle it in the Contact Info or Group Settings.

You also now have more options as to how long the messages can remain in your conversation before it’s deleted. In the previous leak, it only showed 5 seconds and 1 hour but now you have 1 hour, 1 day, 1 week, 1 month, and 1 year. You also have the option to not delete any message by choosing the “off” option. The Delete Messages feature is also compatible with the Dark Theme, which is actually also under development itself.

Why would you want to delete messages you’ve already sent anyway? For one, it’s to protect sensitive information or even documents that you need to discuss with a colleague or friend over the messaging app. Well it can also be used for those who really don’t want anyone else to see their messages for one reason or another but as we all know, the Internet never forgets anyway. But at least you’ll eventually have that option.

As to when Delete Messages will roll out to the stable version of WhatsApp or even to the rest of the beta users, that is still unclear at this point. So we just have to wait when Facebook will officially announce it and make it available for everyone.