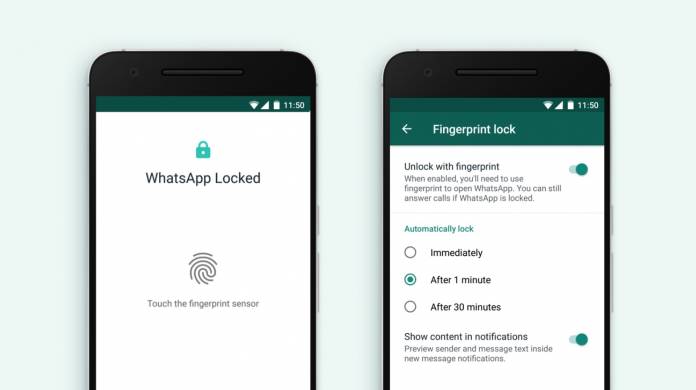 Previously, messaging app WhatsApp announced that they were bringing biometric support to iOS devices. Of course, we knew that they will eventually bring it to Android as well but we didn’t know when exactly. Well, now we finally know as the Facebook-owned app has finally brought fingerprint lock support for Android devices. This means you’ll get another layer of security if you want to prevent people around you from accessing your messages and the app itself without your permission.

The update rolling out to WhatsApp for Android users will now let you lock your conversations and other logs behind another layer of security. However, it doesn’t include blocking calls when you’ve locked it so you’ll still be able to receive any incoming calls within the app. You will also be able to set a timer on the automatic lock so the fingerprint dialog box will not have to appear every time you open the app.

What we don’t know yet is whether this update also supports the latest Google APIs which includes the Pixel 4’s face unlock sensors. What we do know is that you can choose to automatically lock the app immediately, after 1 minute, or after 30 minutes, in case there are prying eyes near you. You can also choose to show content in notifications so you can still preview who’s sending you messages or toggle it off so you don’t see it.

Biometrics are said to be more secure than using pass codes or patterns, even if they are sometimes also prone to issues (hello, Pixel 4’s face recognition). So at least you now have this option to protect WhatsApp and also make it more convenient when you need to unlock and use it quickly.