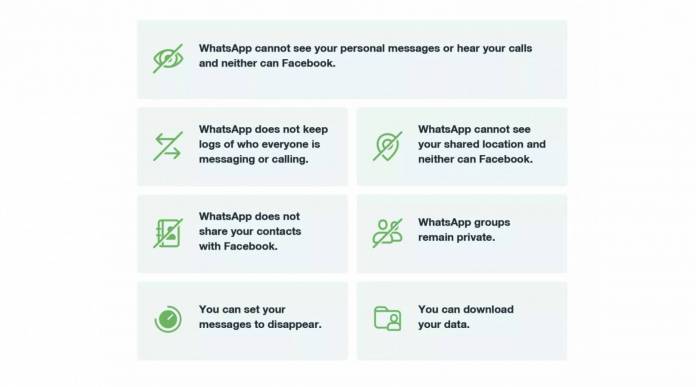 WhatsApp has been fighting a (losing?) battle as they have seen a mass exodus of users that may have been scared of their new privacy policy. The Facebook-owned messaging app has not only moved the deadline for users accepting their new policy but they have also been doing an information campaign to assure users that their privacy for one-on-one and group chats will not be affected. Now it looks like they’re using their Status messages on the app itself to spread the correct information.

The initial information that came out about WhatsApp’s updated privacy policy was that users will be forced to share their information and data with Facebook. And as we all know, people are not very fond of the social media giant right now, especially when it comes to privacy and security issues. While they have assured users that it’s only applicable to those who communicate with business accounts on WhatsApp and that it is an optional thing, the damage seems to have been done as users moved to competitors like Signal and Telegram.

Now WhatsApp is scrambling to disseminate the correct information about their privacy policies and practices. While there’s a whole FAQ page where they talk about their latest privacy policy update, not everyone will probably read that. So what they’re doing now is to use their Status messages on WhatsApp itself to give snippets of what they need to know when it comes to their privacy.

For example, you’ll see a status that says, ‘WhatsApp can’t read or listen to your personal conversations as they’re end-to-end encrypted.’ These are things that users may already know but need to be reminded of. The company says they are indeed using the Status feature to combat the “misinformation and confusion” that has been spreading about their privacy policy. Obviously, the target here are users that are still on the platform but who may be thinking of leaving.

The FAQ page is still the best way to read up on all the questions you may still have. But it’s still good to be reminded of these things when you’re using the app.