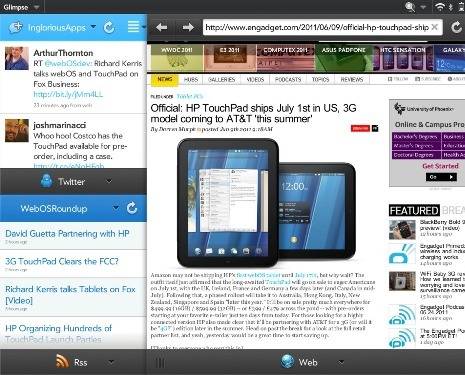 As anyone who’s actually used it will tell you, the death of Palm/HP’s WebOS really is a shame. The little operating system that couldn’t had a lot of great ideas (more than a few of which made their way into Ice Cream Sandwich) but low sales and almost nonexistent app support doomed the platform. That isn’t to say there were no good apps, and one of the best is coming to Android in the future: the multi-faceted, multi-talented Glimpse. The HP TouchPad app does more multitasking in a single window than certain iDevices can manage all day.

Glimpse uses WebOS’ system of panes to divide a work area up into different sections, essentially creating a series of small apps running in their own windows. Functions include a standard Web browser, Twitter and Facebook clients, Google Reader, Read It Later, YouTube, and a collection of more standard features like weather, a notepad and a calculator. Users can customize their screen to divide it almost however they like, and change sections on the fly. As a heads-up display for your various connected services, Glimpse is unparalleled on any platform, at least as far as I’ve seen.

The division of sections in WebOS is hard to duplicate on other operating systems, but now that HP has made the open source code available, developer Inglorious Apps posted an early version of the iPad port on Twitter. Unfortunately he seems to have his priorities backwards and is waiting until the iOS version is complete before starting on Android. We at Android Community respect developers’ choices to work on the platform of their choice, and certainly do not encourage our readers to pester him mercilessly until he commits to equal support for Android. We’d be very disappointed if you contacted him via his website to do so. So you shouldn’t do that. Wink wink, nudge nudge.