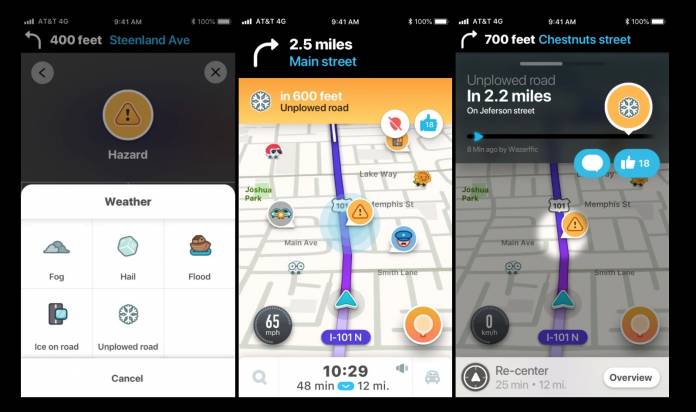 For those that are traveling for the holidays, winter is not a good traveling companion. You can sometimes get stuck in places that have not been properly plowed especially during heavy snowfall. Waze is one of if not the most popular navigation app partly because of its reporting feature. Now they’re adding information about unplowed roads so you know which streets to avoid as you’re trying to get to that party or reunion and you don’t want to get stranded in that weather.

Waze is already a pretty helpful app when it comes to avoiding street congestion, upcoming car wrecks, and accidents, and even “hidden cops”. Now you can add unplowed roads to the things that it can tell you and which you can report. That’s the beauty of crowd-sourced apps like this. It’s a give and take relationship among all the drivers using the app. It’s helpful and it also gives you the chance to become helpful.

On Waze’s navigation screen, you will now see a snowflake icon with the written instructions “unplowed road”. If you see it on your route, then you can decide whether to go through or to avoid it altogether. And if you see one that wasn’t reported or you want to reiterate what was already reported, then you should be able to tap the icon as well, similar to how to report the other items/incidents that were previously available.

Google says that the launch of the feature is a result of their partnership with the Virginia Department of Transportation, one of their Waze for Cities Data partner. They suggested having such a feature to help the community of over 130 million monthly users to avoid “hazardous winter weather conditions”. Granted, not all of those users actually go through winter conditions, but at least those that do will have important information at their fingertips.

This new reporting feature is available in over 185 countries where Waze is accessible. It can be found under the Hazards > Weather > Unplowed Road section. If this is something useful for you, go ahead and start helping the community as well this winter season.