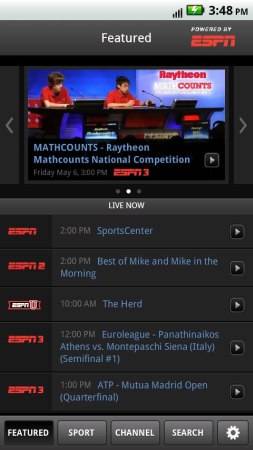 There is a lot of times during the week when you might find yourself with nothing to do and wishing you had something you could watch. You can resort to watching questionable YouTube videos or Netflix if you have it. If you are a big sports fan, the WatchESPN app has landed on the Android platform. The app has live video streams from channels just like the iPhone version.

The app requires you install Adobe Air and that the smartphone be using Android 2.2 and up. The app apparently isn’t supporting the larger screens of Honeycomb tablets at this point and there is no mention if later updates to be more tablet centric. The big downside is that the app will only work for subscribers to cable providers that are supported. Supported providers include Time Warner Cable, Bright House Networks and Verizon FiOS TV.

The channels supported include ESPN, ESPN2, ESPN3, and ESPNU. Depending on your plan, you may be limited to streaming ESPN3 alone. If your cable company is supported you can grab the app for free on the Android Market. An iPad version is supposed to be coming, perhaps after that version launches a version for Honeycomb tablets will come.