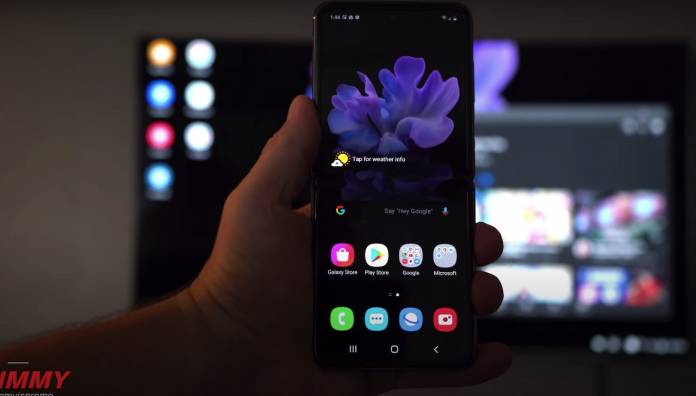 We weren’t exactly sure about the fate of Samsung DeX. We’ve been waiting for significant improvements but it seemed Samsung has been quietly teasing the feature. Before the Galaxy Unpacked, we noted the Samsung Tips app revealing the future wireless Samsung DeX mode. The wireless Samsung DeX has been an idea since 2018 but it’s only now that it’s ready. We have yet to do a comprehensive review of the Galaxy Note 20 so we have no idea how smooth and reliable Wireless DeX is.

Jimmy is Promo, the same YouTuber, who shared with us Galaxy Note 20 Ultra hands-on images, showed a first look video of the Samsung Wireless DeX on his channel. He demoed how the new DeX works wirelessly using a Galaxy Z Flip 5G.

The feature will also be available on the newly announced Galaxy Note 20 and the Galaxy Z Fold 2. The idea is basically the same. Your phone apps can run and be previewed on a bigger screen like a TV or a monitor.

Samsung DeX has been available for some time but it needs a special docking station. The latest development no longer needs wires or cables. You can wirelessly preview your phone’s content to a larger display seamlessly via Wireless DeX.

The idea is nothing new really as most Android phones could already “cast” their screens onto a smart TV or display. There are differences though like with the wireless DeX, you can cast the content to a display and then use the phone like a “mouse” (cursor) to control what’s on the screen.

With wireless DeX, you can play videos on the screen and also do smartphone stuff on your device like reply to messages or answer a call. It’s only a few of the many improvements but we’ll have to see for ourselves.