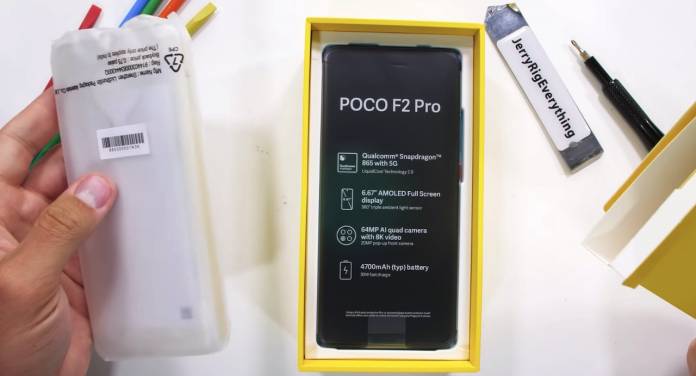 Xiaomi’s sub-brand POCO is now a standalone company. The Chinese OEM made the announcement earlier this year. The POCO brand is back with a new POCO F2 Pro smartphone. It was teased several times before the official launch and then was officially announced. It is one powerful beast that arrived at a competitive price. The phone is now available in Europe and is expected to roll out in other key markets. The gaming phone comes after the POCO X2 which was first announced in India but looked a lot like the Redmi K30.

The PocoPhone F2 Pro was the recent subject of a durability test by JerryRigEverything. Zac Nelson really knows what phones to prioritize. The device was recently scratched, burned, and bent. It costs around $500 so we want to know if it’s worth the price.

Others may say this is still mid-range but it’s a powerful gaming phone. Just like its predecessor, this phone made us wonder how it is affordable. So is the Poco F2 Pro durable enough? Watch the full video below:

As with most flagship phones, the Poco F2 Pro scratches at level 6 with deeper grooves at level 7. The pop-up selfie camera scratches even if it’s glass. It’s obviously robust and secure though.

The Poco F2 Pro’s sides are made of aluminum. There is some metal around the build so we can say this phone will survive rough handling. It does not have water-resistance so be careful that you don’t drop the phone in water.

Placing the front display after some heat shows some white residue after 30 seconds. The screen recovers.

As for the bend test, this one cracks in the first round. Bending the phone again for a few times doesn’t do damage though so it’s safe. No structural damage has been found.