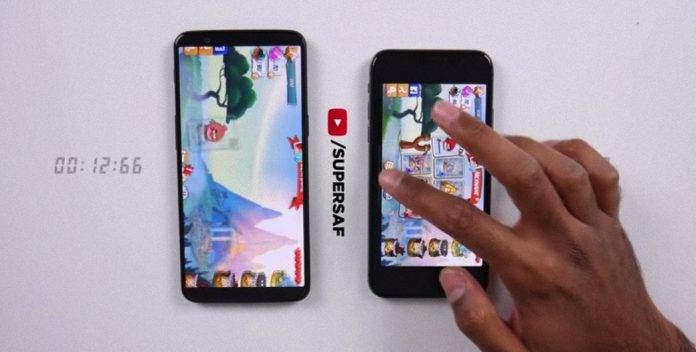 Fighting in a Speed Test are two of the latest premium flagships today. The OnePlus 5T competes against the iPhone X in a series of more detailed speed test. We’re curious to know if the improved OnePlus 5 is faster than the iPhone X, Apple’s 10th anniversary phone offering. We’re rooting for the OnePlus 5T because we’ve seen its many performances already in similar tests. The iPhone X is still expected to be fast but we’re also guessing some limits will manifest.

The Speed Test done by SuperSaf TV has focused on benchmark scores, camera launch, opening of regular social apps, games, and RAM management. The iPhone X has scored higher on the benchmarking site as proven by the device’s super quick response. The two phones actually go neck and neck with the speed with the quick launch. Twitter has opened faster on the OnePlus 5T. Refreshing the apps, the difference is not noticeable.

The tester has managed to open a number of other programs like Instagram, image gallery, FB pages manager, YouTube, and games. As for the games, some of the top mobile games are launched starting with the Angry Birds, Super Mario Run, Sonic Dash, Temple Run, and Subway Surfers. Both phones show speed that you won’t even notice the difference.

The RAM management is checked by relaunching those apps. It’s really faster in the OnePlus 5T as most games because the iPhone X reloads the app most of the time.