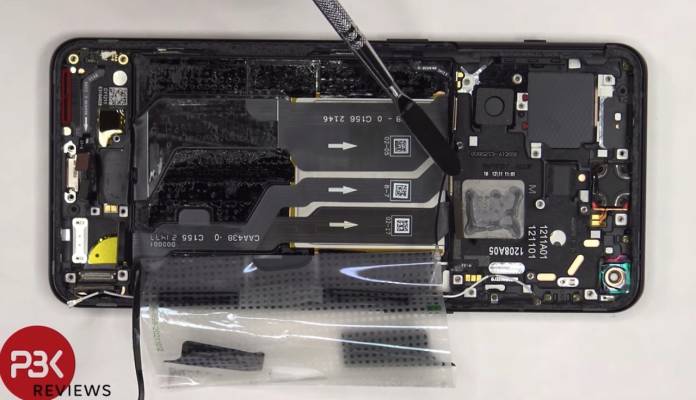 Teardowns tell us how well a company has designed a device. We only check out for those flagship models. The last one was the Sony Xperia Pro-I from last month. Now we’re looking at the recently announced OnePlus 10 Pro. PBKreviews did the honor of scrutinizing the new premium OnePlus smartphone. OnePlus has a solid following in China and the new device is said to be selling fast although we have no new numbers. The phone will be available in other key markets soon.

For now, let’s dive into this disassembly video. If you plan on doing a repair or replacement in the future, you can refer to this video on YouTube.

The teardown video shows off the three cameras used. There is the 48MP primary camera, 8MP telephoto, and a 50MP ultrawide. Repairability score is only 6 over 10 which means it’s not that easily repairable.

Opening the device is fairly east. Just apply some heat using a hair dryer. You can also use a heat gun plus a plastic pry tool to remove the rear plate off. The phone uses a glass back. You can replace the glass camera lens. Inside, you can see a bit of foam padding in the middle for protection. Remove the 20 philips screens to remove the metal cover. There is a flex cable underneath that can be disconnected.

The graphite film can be removed from the bottom speaker. Other parts you see can be taken off with no problem. Further, you can see a large area of graphite film, wireless charging coil, flex cable of the dual led flash, and the ambient light sensor.

You will also see multiple antenna lines, two contacts with nfc cable, wireless charging coil, battery cable, and more cables. The other parts can be removed easily. Just be careful that you don’t destroy anything.