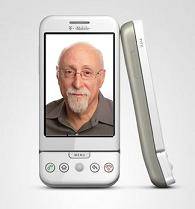 The G1 has only been official for an hour or so, but that hasn’t stopped Walt Mossberg from putting out his extensive pre-review first-impressions.  The man who we all thought was surgically attached to his iPhone seems particularly taken with the T-Mobile device, citing slick software, the inclusion of MMS and Street View and “more flexibility in organizing your desktop, or home screen, than the iPhone, or almost any phone”.

However, he also saves some criticism for the G1.  The lack of multitouch is an obvious black mark for the handset, as is the non-standard headphone socket.  It also lacks automatic screen rotation, and the included 1GB memory card is far smaller than the $199 iPhone 3G’s 8GB.  Still, a removable battery and a hardware keyboard that’s said to be “OK, but not great” are both improvements over the Apple device.

“In sum, the G1 is a powerful, versatile device which will offer users a real alternative in the new handheld computing category the iPhone has occupied alone” Walt Mossberg

In all, though, Mossberg seems quite taken with the T-Mobile G1, and Android as a fledgling platform.  He’s promising a full review soon; of course, we’ll have our own hands-on first impressions as well, so keep reading Android Community!