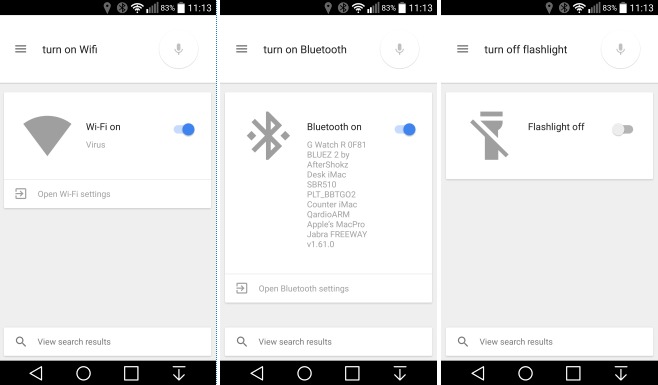 Android 5.0 Lollipop has not arrived yet for a lot of Anrdoid users, but it is slowly trickling down to various OEMs (not as fast as everyone would like). The lucky users have been slowly discovering the various ins and outs of Google’s major update, and one thing that is finally working now is the setting toggles which allows you to activate and deactivate your WiFi, Bluetooth, and even your smartphone’s flashlight through your voice commands.

There have been apps that can do this for some time even before Lollipop, but now you don’t need to install a third-party software to be able to do so. Simply use the power of Google Now to turn your WiFi on or off, let your Bluetooth be active or inactive, and even use your flashlight when you feel like doing so. Once you’ve activated (or deactivated) the function, you’ll receive an audio feedback that it’s working. But it also displays a card and a small toggle, just in case you feel like you’ve made a mistake and revert to your previous settings.

Some smartphones have removed the flashlight toggle from their drop-down menu, so having a voice command to turn on the light when you need it the most, just by saying “Ok Google” is pretty neat. And having a third-party app do that for you can sometimes take up more time, so better that the feature is now built-in.

Hopefully, voice commands for other important functions will also be available soon. Wouldn’t it be more convenient if you could just talk to your phone to turn on/off your Airplane mode and location enabling/disabling, or if you could also adjust both the brightness and volume of your device through voice commands? Make this happen, Google!