In what comes as a surprise to no one, a study has shown that despite the best efforts of most tech companies to give drivers a safe way of accessing their gadgets while on the road, it still doesn’t guarantee that they will not be distracted. The American Automobile Association (AAA) partnered with a research group from the University of Utah to conduct a study on the effects of hands-free features from various gadgets and accessories.

Unsurprisingly, the results show that even if they are not physically touching their smartphone, drivers will still get distracted when accessing the voice-activated command and features of their gadget. Answering a phone call or giving a command to your smartphone still takes mental effort and we all know that even a split second distraction can sometimes lead to an accident. Their study shows that it takes 27 seconds for a driver to regain focus after giving a voice command, and that’s just too darn long and a lot can happen in between.

The study looked into cars that had built-in infotainment systems plus the three main virtual smartphone assistants, Google Now, Siri, and Cortana. Among the three, Google Now is the least distracting, although not by very much, Siri is in the middle, and Cortana was the worst. As for the cars, the Mazda 6 was the most distracting and on the other end of the spectrum, the Chevy Equinox and the Buick Lacrosse were the worst offenders. 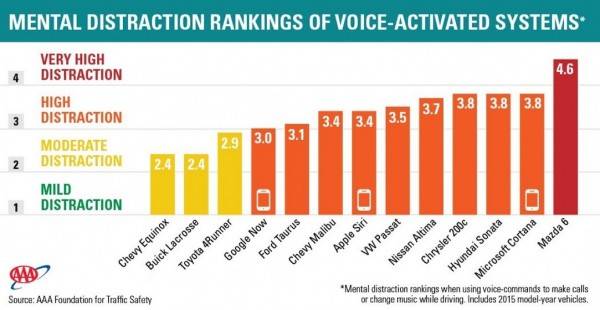 The recommendation of the researchers is that drivers should avoid using hands-free tech while driving and just wait until you’re off the road before checking on your email or making calls and sending messages. But of course, fat chance that majority of drivers will actually do that right?