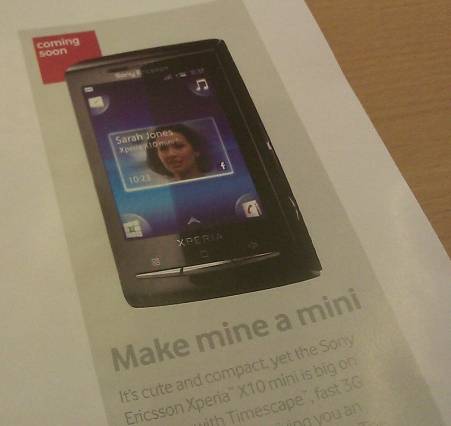 Vodafone UK have confirmed that the Sony Ericsson XPERIA X10 mini – the palm-sized version of the Android XPERIA X10 – is “coming soon” to the network.  CoolSmartPhone spotted the handset, which has a 2.55-inch capacitive touchscreen, 3G and Sony Ericsson’s Mediascape and Timescape UIs, in the May issue of Vodafone’s magazine.

The handset is yet to make an appearance on Vodafone’s site and there’s no confirmation of exactly when the Android device will launch.  Still, we’re expecting it to be priced from free with a new contract, though there’s also the possibility that Vodafone might offer it on a mid- to high-tier prepay contract too.

There’s also no sign of its QWERTY-blessed sibling, the similarly-small XPERIA X10 mini pro.  More on the Sony Ericsson XPERIA X10 mini in our hands-on coverage over at SlashGear.