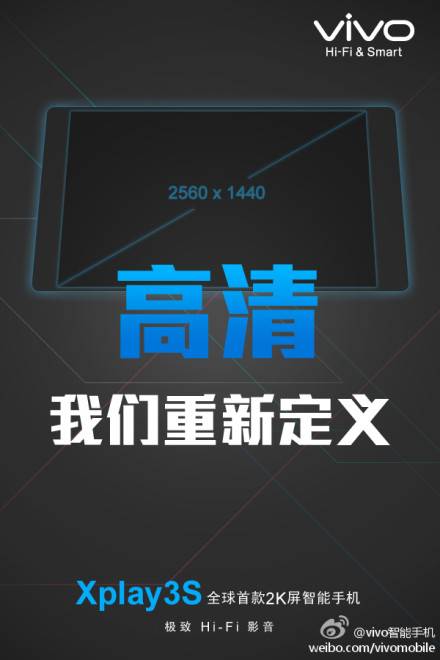 Nothing screams “better” than bigger numbers right? That just might be the kind of thinking that’s going on in Chinese manufacturer Vivo’s head as it teased to the whole world its next pursuit: the Vivo Xplay3S, the world’s first 2K display smartphone.

That’s 2560×1440 pixels all crammed into a display the size of a smartphone. Vivo doesn’t exactly say how large the screen will be. But even presuming it’s as large as the 6.3-inch Samsung Galaxy Mega or even just the recently announced 5.9-inch HTC One Max, that’s still a lot of pixels to pack in handheld device. In comparison, So far the only Android devices to sport such resolutions are the large Nexus 10 and the new Galaxy Note 10.1 2014 edition, both of which carry a resolution of 2560×1600 pixels.

Of course, the Vivo Xplay3S has other things to brag about. It will, quite naturally, be powered by the latest quad-core 2.3 GHz Qualcomm Snapdragon 800. It will also support dual-mode LTE, allowing it to utilize both TDD-LTE and FDD-LTE 4G networks for blazing fast speeds. But those features are quite common in premium smartphones these days. We’re all more interested in the screen resolution, right?

It still remains to be seen what effects, beneficial or adverse, such high resolutions will have on a small device, which usually translates to super small images and fonts. Who knows, maybe Vivo will indeed pioneer a new hardware trend, or it will end up proving that bigger, or in this case higher, doesn’t always mean better.