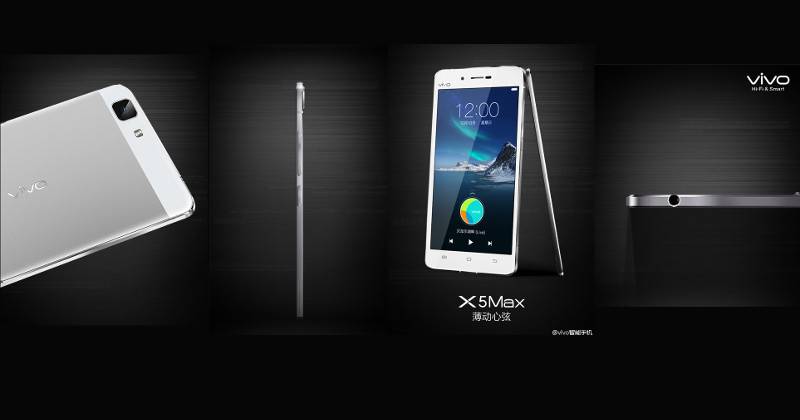 So Chinese OEM Vivo has again managed to pull it off and has unveiled what is most likely the world’s thinnest smartphone. Measuring only 4.75 mm, the Vivo X5Max naturally has to have similarly thin components in order to reach that size. And yet, it still manages to cram a regular 3.5 mm headphone jack on top of it all. And it even has one or two gimmicks to keep it interesting as well.

The smartphone is powered surprisingly by a Qualcomm chip, specifically the 64-bit octa-core Snapdragon 615. There’s 2 GB of RAM and only 16 GB of storage, though that can be expanded by a micro SD/TF card (more on that point later). The screen is a rather big 5.5 inches, yet it only reaches 1080p resolutions. The 13 megapixel rear camera is powered by Sony’s IMX214 sensor and it has a selfie-friendly 5 megapixel front shooter.

But you’re probably more interested in the thickness, or rather thinness, which is really the Vivo X5Max’s defining trait. To pull off the 4.75 mm size, Vivo sought out the thinnest possible parts and frames. Supposedly, it has the thinnest motherboard at 1.77 mm, made possible by using a unique “one-sided” layout. The Super AMOLED display is also claimed to be the thinnest there is at only 1.36 mm. The speaker box is also quite thin, though thicker than the rest at 2.45 mm. That, by the way, is driven by a Yamaha YSS-205X Hi-Fi chip. Despite that thin-ness, there is still a regular size headphone jack, which cause a slight bump on that edge of the smartphone. Battery is at 2,000 mAh, on par with the thickness. The custom Funtouch OS 2.0 is based on Android 4.4 KitKat.

The Vivo X5Max has another rather intriguing feature. Like almost all Chinese smartphones, this one supports a dual SIM setup, but that second card slot has a split personality. One one hand, it house a nano SIM card for your second SIM, while the main SIM slot houses a micro SIM card. But in case you don’t have or want a second SIM, you can use that to hold a microSD card instead. A pretty ingenious way to save up space and avoid adding thickness, but it does mean you can’t have an expanded storage and use two SIM cards at the same time. 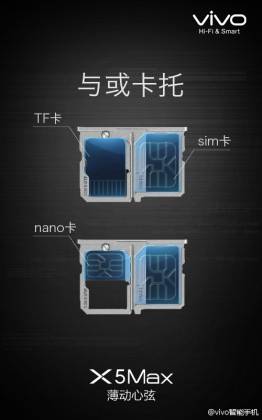