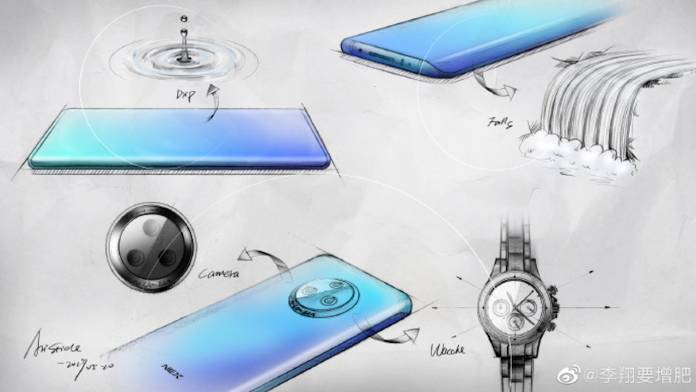 The original Vivo NEX was launched middle of last year. It made an impression with the elevating camera. The Vivo NEX 2 quickly surfaced after a few months, coming out better with triple rear cameras, dual displays, and a lunar ring. It was officially called the Vivo NEX Dual Display Edition phone and the company once again surprised the market with the dual-sided screens and a new camera system. And just a few weeks ago, the Vivo Nex 3 was noted to arrive with more than 100% screen-to-body ratio. Details are scarce but we firmly believe it’s arriving soon especially after a series of posts on Weibo.

The image above appears to be the front display panel. There seem to be curved edges so we can probably expect a bezel-less display. The other photo is an illustration or design sketch of a Vivo smartphone that shows the said curved edges. The effect is that of a “waterfalls”.

A protruding, triple rear camera system is very visible. The setup is unique because of the ring the holds the three cameras in triangular orientation–not the usual square array or horizontal/vertical placement. The phone will still have a headphone jack according to a source so many people will like this.

The back panel clearly shows the NEX so we have a feeling this is really for the VIVO NEX 3. The past two Vivo NEX phones are very much different from each other. We won’t be surprised if this one will bring something new and unique.

The illustration also shows a watch there so we’re thinking maybe Vivo is working on a smartwatch. It looks like a diver’s watch but we can’t help but think it can be liked to the triple rear cam system of the NEX phone beside it. What do you think of this new design?