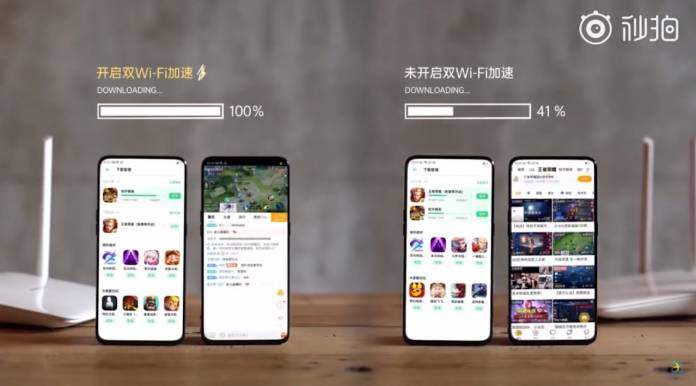 While most OEMs are concerned with making foldable phones work or improving the cameras, both OPPO and Vivo are interested in enhancing WiFi connectivity. It’s nothing new but it’s always good to hear other tech companies going against the flow. For some, they’re actually going ahead with all the new innovations and technologies being introduced. Your phone’s WiFi connection will be more reliable than ever in the near future. Dual WiFi will be a major feature of upcoming smartphones from Vivo and OPPO as leaked on Weibo. Some information surfaced through a couple of videos concerning new devices from the two.

There is no official announcement yet but a video surfaced online showing off the Dual WiFi feature on the Oppo Reno 10x Zoom. It’s used to connect to fast 2.4GHz and 5GHz frequencies at once. This shows having both active connections will make connectivity more stable than ever. It also improves download speeds by 32%.

Vivo also presented a similar video, showing off two iQOO phones. One unit is connected to regular Internet while the other one is connected via Dual WiFi. The idea is really faster and more stable WiFi connections with Dual WiFI.

We have yet to know more about the Dual WiFi feature but we can expect fast wireless Internet connection. It’s not 4G LTE or 5G but real WiFi that may be available at home, in the office, school, mall, or just about anywhere. Uploading and downloading files may be significantly faster. When it comes to gaming, online games may see a decrease in latency.

In the near future, expect Vivo and Oppo flagship phones to boast Dual WiFi already. More tests may be made before the official launch and announcement. The new technology may not be that innovative or life-changing but Internet connection will definitely be faster. Other OEMs may follow the two companies once the tech becomes a standard. And after this, expect further improvement in the coming years.