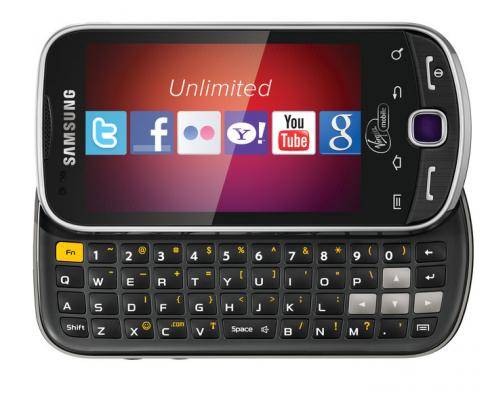 The Samsung Intercept, Virgin Mobile’s first Android powered device, will be coming to Target stores starting today and online later this month and announced by Virgin Mobile. It is priced at $249.99 with no contract and monthly plans starting at $25 a month.

Some of the offered plans by the pre-paid carrier include an unlimited text, e-mail, with data and voice starting at just $25 a month. Pricing goes up from there depending on the amount of minutes with 1200 at $40 a month and unlimited at $60 a month. It will be available from Virgin Online later this month, and other retailers throughout the month.

WARREN, N.J. – Oct. 4, 2010 – The line between prepaid and postpaid mobile offerings has become even more blurred as Virgin Mobile USA enters the Android™ smartphone market. Beginning today at Target stores nationwide, Virgin Mobile adds the Samsung Intercept™, running on the Android mobile operating system, to its affordable, no-contract lineup of handset and service offerings. The Intercept will roll out to other major retailers throughout the month and will be available for purchase at virginmobileusa.com by mid-October for $249.99.

“As smartphone users come up for contract renewal and examine their monthly costs, they will start to wonder why they are paying more each month when they can get similar services from Virgin Mobile at a fraction of the price,” said Bob Stohrer, vice president-Marketing, Virgin Mobile USA. “With the Samsung Intercept on Android, Virgin Mobile is leading its customers into new, eagerly awaited territory while expanding our potential customer base.”

The Android device gives Virgin Mobile customers full integration of social networking apps, Microsoft Outlook Exchange e-mail and advanced messaging capabilities. Users of the Samsung Intercept also have access to more than 80,000 applications currently available on the Android Market™, and can sign up for one of Virgin Mobile’s Beyond Talk™ plans which include e-mail, data and Web along with 300, 1200 or unlimited voices minutes per month and are perfect for the person always on the go.

In addition to a 3.2-inch touch-screen display, a full slide-out QWERTY keyboard and a 3.2 MP camera and video, the Samsung Intercept also comes preloaded with multiple applications, including such favorite social apps such as You Tube®, Facebook® and Google Talk™ as well as the Virgin Mobile Live app used to access Virgin Mobile’s branded music stream.  Additional features include:

The Samsung Intercept, paired with Virgin Mobile’s no contract Beyond Talk service options at $25, $40 and $60 a month, offers one of the best smartphone values in the industry.