We were able to get up close and personal with both of these tablets and we can vouch that they do indeed run smoothly. Viliv says they are trying to work with Sprint to release the X7 on their network, but in their press release it’s stated that both of the devices will either land on WiMAX, 3G HSPA, or EVDO networks. Both will support bluetooth and have an “always-on” internet connection so checking email and surfing the internet will always be snappy.

Android 2.2 Froyo was preloaded on the device but they hope to have Android 3.0 Honeycomb up and running if at all possible before their releases in March and April. The two tablets will contain stand-alone GPS, a 3MP rear facing camera, and a 1.3MP front facing camera for video conferencing. Viliv also states these two tablets will have the longest lasting battery life that any Android Tablet has ever had; but of course we couldn’t test this feature. 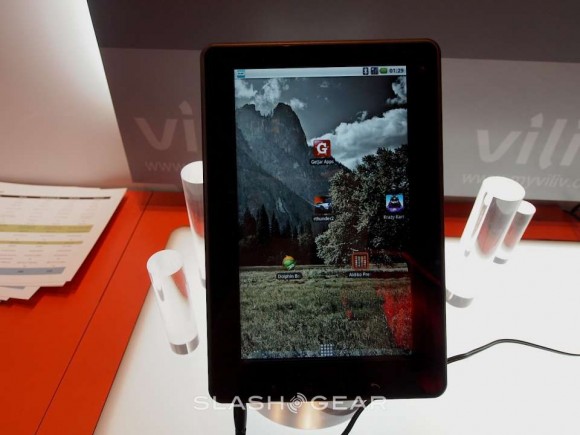 Las Vegas, US, January 6th, 2011 – A leading Tablet PC manufacturer, viliv (Yukyung Technologies Corporation) today announced two new lineups, the Android Tablet X7 and X10. The tablets are powered by Android 2.2 / 3.0(TBD), with a Cortex A8 1GHz CPU and Power VR SGX 540 GPU chipset. The X7 and X10 are expected to be launched worldwide in March 2011 and April 2011 respectively.
The viliv X7 and X10 allow users to experience true anywhere connectivity with options for 3G HSPA, EVDO, or WIMAX. The new X7 and X10 lineup also feature a best in class battery life, the highest of any current or soon to be released Android devices, continuing to demonstrate viliv’s dedication to creating powerful mobile devices that are truly connected and allow for a full day of productivity.
With support for full HD playback, the viliv X Series Tablets brings consumers a realistic multimedia experience when watching movies, playing games or viewing pictures. Storage can be expanded via the integrated micro-SD card slot (supports SDHC up to 32GB) to provide even more space to store your media. The integrated HDMI-out port even allows you to share them all with friends and family when connected to an HDTV.
With a lightweight design to allow for ease of use, the X Series Tablets includes a number of supportive features such as 802.11 b/g/n WiFi, Bluetooth, stand-alone GPS, a rear 3MP camera and front 1.3MP camera enable users to communicate with substantial quality. The front camera provides for easy video conferencing, while the rear 3MP camera catches images and produces video with clarity that can be shared and edited.
“We face new information technology everyday and viliv tablets can be a solution provider to make our life easy and simple. This fast-changing environment creates demand and we are able to meet customer’s expectation with our decades-old experience in mobile technology.” said Dr. Seung-Jin Yoo, COO/Executive Vice President, viliv by Yukyung Technologies. “Thanks to our understanding of mobile environments, viliv is able to see the opportunities in the field and its tablets take a unique position in the market. IT environments have been changing so fast and people’s expectations are higher than ever. viliv’s brand-new tablets can satisfy all these high expectations.”
In addition to the X Series Android tablets, viliv also unveiled the X70 Windows 7 Slate, proud that it is the slimmest and lightest Windows 7 based tablet in the world. The X70 Slate is the second version of viliv’s existing model, the X70EX. It features upgraded functionality such as Intel next generation mobile CPU, 2GB memory and a smooth capacitive multi-touch LCD. Its 14.3mm ultra- slim design and 420g (0.926lb) weight enhance its portability.

Rei Padla - May 6, 2021
We can all agree that Android isn’t exactly the most secure mobile platform in the world today but we recognize the efforts of Google...

Android 12 OS update for LG phones will still be available

Ida Torres - May 12, 2021
Most of the tech giants now are trying to create the next TikTok to get a piece of that lucrative video-sharing market. YouTube recently...