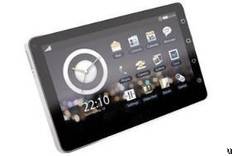 Viewsonic, for the time being, is known pretty much predominantly for their monitors. And there’s nothing wrong with that at all. But, it looks like they’re ready to broaden their horizons, because they’ve just unveiled plans to launch an Android-based tablet some time in the future. And, shockingly enough, it’s not just another run-of-the-mill tablet, either. It’s actually coming with updated software!

The tablet itself will be of the 7-inch variety, and it will feature Android 2.2. There will also be a built-in camera, but not mention whether or not it will be a front-facing one. It will have voice calling support, and have some kind of 3G connectivity. Unfortunately, Viewsonic is just planning on releasing this in the UK some time in the near future, and it will retail for somewhere around the 500-range. No word on whether or not it will ever come state-side. But, considering all the other options we have out there, will anyone miss this?