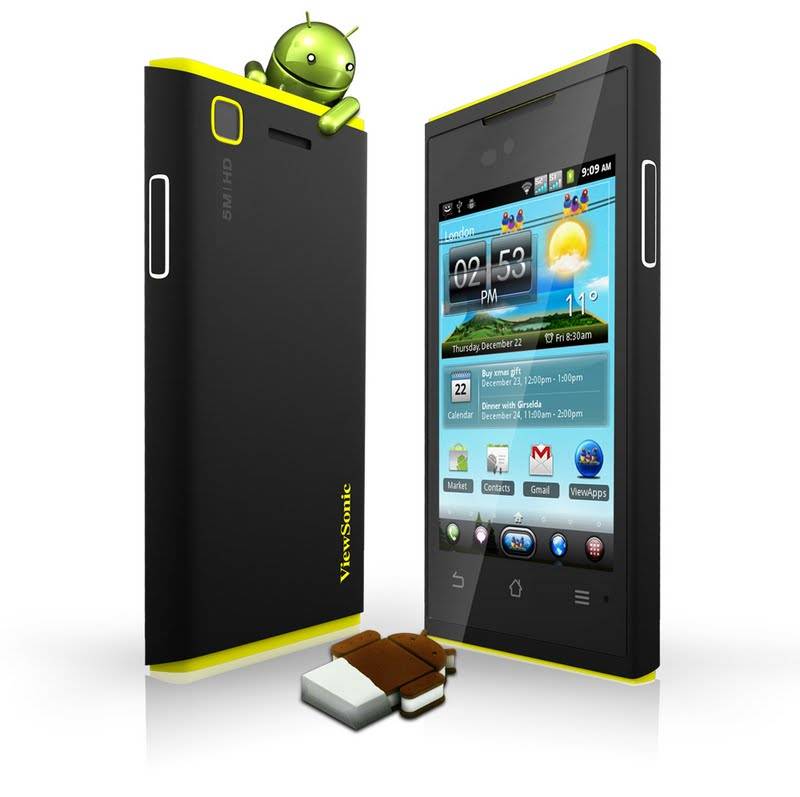 Thought you’d seen all the pre-Mobile World Congress spoilers you were going to, didn’t you? Not so: the normally reserved ViewSonic has busted out with no less than three brand-new handsets, and all of them feature the newfangled dual-SIM architecture that allows a phone to connect to multiple networks and use two separate phone numbers at a time. All three are probably headed to MWC in just three short days. ViewSonic hasn’t had the best of luck breaking in to the smartphone game, and they have a habit of revealing concept hardware and never putting it into mass production, so who knows when or if they’ll become available.

The first of the three is called the ViewSonic 4S – hey, somebody stop that lawyer in the Armani suit! He’s headed for Cupertino! Anyway, the phone features a 3.5-inch IPS LCD screen, which is smaller than most Android phones and in fact matches the iPhone. Even more strange, it uses a 4:3 aspect ratio…. like the iPhone. Of course, at least one thing differentiates it: the resolution. The screen is 960×640 pixels, which is admirably high res and, uh, exactly like the iPhone 4S. Maybe just let that lawyer guy go on about his business. The 4S has a 1Ghz processor and a 5MP rear camera, and runs Ice Cream Sandwich – at least in the renders.

The ViewSonic 4E is a little more down-market, with the same 3.5-inch screen size but a reduced VGA resolution. This one has a 3MP camera. The big daddy of the lineup is the 5E, clearly taking aim at the Samsung Galaxy Note and LG Optimus Vu with a 5-inch screen and Ice Cream Sandwich. There’s no date or price mentioned for any of these phones – it could be that ViewSoinc is shopping them out as designs for other manufacturers to buy, then produce themselves. The $S obviously can’t be sold under its current moniker anyway. We’ll be sure to stop by ViewSonic’s booth at Mobile Work Congress, if only for the entertainment value.