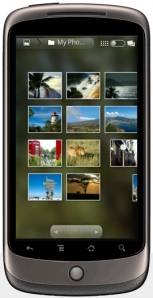 Jkontherun says to expect the N1 in April with “something that the versions on other U.S. carriers lack.” Flash 10.1, a better touch screen and the trackball will be swapped out for the Desire’s trackpad? There is also a video of the google.com/phone page that shows this being available for a short time.

I predict a bunch of pitchforks and burning torches at Google’s doorstep if this turns out to be true. If there is a better touch screen and the other modifications made, Google needs to rename the phone. Some of us that have the current edition of the Nexus will want these modifications as well. Especially Flash 10.1 and the better screen. And that would cost a pretty penny to have all the screens changed on every phone that has been sold to date so it’s unlikely Google would swap them out.

It’s kind of blurry but in the leaked video it looks like this phone can be purchased subsidized like the T-Mobile compatible version. If so they would be the second carrier to offer this phone at a lower price than the other carriers. Looks fake to me but you be the judge.