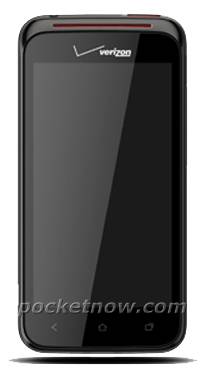 Verizon’s been the odd man out of HTC’s One family showing here in the US. While AT&T, The Now Network and T-Mobile have thier fun with the One X and One S respectively, Verizon is left to cradle its exclusive Gingerbread powered Rezound, now in severely reduced circumstances. But that may not be the case for long: we’ve heard tell of the HTC Fireball, now thought to be a codename for the (DROID?) Incredible 4G, an update to the DROID Incredible 2. Pocketnow got a look at a leaked render of the device and… well, it looks a lot like the HTC One S.

Stare at its blank beauty! Note the Verizon Red accents on the speaker grille! Marvel at three Ice Cream Sandwich-style capacitive navigation buttons! Hooray! Previously we saw the Incredible 4G/Fireball with a white plastic back. The render shows a decidedly black phone (though there’s no way to tell what materials are in play), so either there’s a major redesign at hand or the phone will be available in multiple colors. The previous leak did show some styling that echoes the non-symmetrical back of the Incredible family.

Leaked specs include a a dual-core 1.2Ghz processor (probably a Snapdragon S3, a step down from the One series’ S4) and a QHD display of unknown size and panel type, but I’m going to guess either 4.0 or 4.3 inches. When compared to the One S and modified to fit the same screen, the buttons line up at the same size ,but further down the body, implying considerably larger phone if the screens are the same. Naturally the phone will have a 4G LTE radio (which might account for a larger size), and given HTC’s latest offerings and the design of the phone, Ice Cream Sandwich and Sense 4.0 seem like no brainers. There’s no official price or launch date, naturally, but since it’s going on six months since the Rezound was released, “soon” would seem like an obvious choice.

Update: Android Police found some blurry shots of what looks like final hardware. IN context, the phone looks a lot like a blending of the Rezound and the Incredible 2. Also: the DROID branding seems to have been nixed. 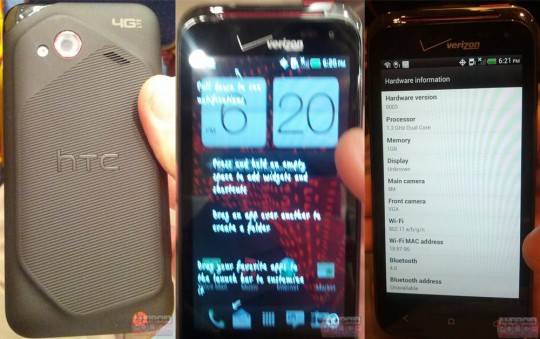